Litecoin (LTC) is one of the oldest cryptocurrencies in existence and launched in October 2011 as a fork of Bitcoin. It shares many of the same characteristics as Bitcoin but strives to be lighter and faster and as a result, exhibits shorter block generation times of approximately 2.5 minutes. This allows for both faster transaction clearance and in turn, lower transaction fees than Bitcoin.

For the longest time, Litecoin held the position of fifth-largest cryptocurrency by market cap, though it has since been knocked aside by EOS. Litecoin is now in sixth place and remains amongst the top ten cryptocurrencies in circulation. It was developed in 2011 through a bitcoin fork by former Google employee Charlie Lee, making it older than bitcoin’s primary competitor Ethereum. From there, Lee was able to create his own genesis block and start a new digital currency with no previous transactions under its belt.

“Another interesting aspect is that Litecoin has experienced a very significant correction from the all-time highs of the cryptocurrency industry in January 2018. With respect to its all-time high of $378, Litecoin has fallen by 81 percent to its current price. This is a slightly larger decline than the 71 percent decline in the total market cap of all crypto assets. Given that Litecoin has an established and stable working product, as well as significant adoption, this bear market of the whole cryptocurrency industry could have led to Litecoin being oversold.”

How Does It Fare with the Father of Crypto?

Litecoin is often referred to as “digital silver” alongside bitcoin’s “digital gold.” While this is partly due to the currency’s age (bitcoin is only slightly older), Greenspan assures it has ultimately remained one of the market’s most important entities, as well as a primary alternative to bitcoin in that it offers cheaper and faster transactions. 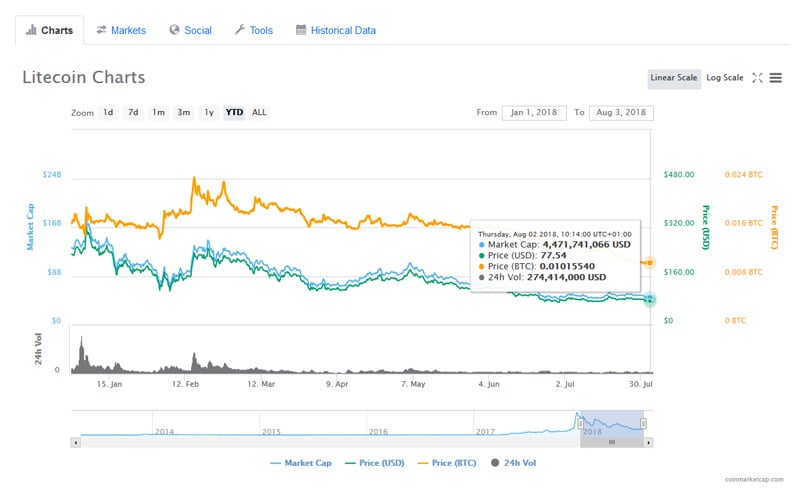 Litecoin Price Chart since Start of 2018

It is also one of the more liquid coins, and easier to trade to fiat when compared with other altcoins. It further offers a little more diversification than other forms of digital money in that it is considerably more affordable than bitcoin, giving it more room for growth.

Lastly, it is appropriate that Litecoin would garner comparisons to silver, while bitcoin is placed against gold. One ounce of gold costs approximately 80 ounces of silver, while at press time, one bitcoin is worth roughly 85 LTC. The amount of Litecoin meandering through the cryptocurrency arena is about 3.35 times larger than that of bitcoin, and the final total will be four times larger. Litecoin is also mined much faster than bitcoin, which means that the price of Litecoin should eventually rise faster than the price of bitcoin, according to the report.

Chances are that when you think of cryptocurrency, you think of Bitcoin. That’s understandable. Bitcoin has been the public face of all cryptocurrencies since it first appeared on the scene in the shadowy Satoshi Nakamoto‘s white paper in 2008. Its subsequent adoption by the Silk Road black market and meteoric rise in price, which turned pizza change into millions of dollars, forever cemented it as the coin to watch.

Bitcoin, however, is a product of its times. Very little tech has survived from 2008 unchanged, from mobile phones to laptops to solar panels. Bitcoin is no exception. Although its introduction was revolutionary, its underlying code has aged somewhat poorly. Bitcoin was never really designed to handle the kind of traffic the network currently demands, and so speed and scalability issues have plagued the Bitcoin community since shortly after its rise to prominence. This has a resulted in at least 30 legitimate forks of the coin’s open-source code, almost all geared toward improving Bitcoin’s average transaction speed.

One notable fork that did not adopt the profitable Bitcoin name was Litecoin. Since its creation in 2011, Litecoin has risen to become one of the main alternative coin base pairings on most major exchanges, and it frequently fills in the transaction speed gaps that would otherwise doom Bitcoin to irrelevance. We’re going to take a brief tour of the history between these two cryptocurrency giants, examine the state of the market, and try to figure out what the future holds for both currencies.

The Birth of Litecoin

Litecoin’s creation stems from a dispute between Bitcoin developer Charlie Lee and the mainline Bitcoin community. Between February and June 2011, Bitcoin’s price rose from $1 to $31, a huge increase. While this was viewed by most members of the Bitcoin community as a net positive, Lee maintained that Bitcoin was already facing scalability issues and the price was rising out of proportion to the network’s ability to handle peer-to-peer traffic. To resolve this issue, he created a hard fork of Bitcoin’s code to form a new, faster, and cheaper coin dubbed Litecoin. Litecoin’s supply was set at 84 million, almost four times Bitcoin’s 21 million, to rein in per-coin pricing. Its transaction time was reduced to about a fourth of Bitcoin’s, and its block reward doubled.

Furthermore, Litecoin mining is significantly cheaper than Bitcoin mining in terms of electrical cost. The downside is that the scrypt used to mine Litecoin is a stripped-down version of the Bitcoin scrypt, and so it may be inherently less secure. After all, security is one of the main reasons for using cryptocurrency in the first place, Bitcoin supporters argue, and compromising security to make spending Litecoin easier is a potential recipe for disaster.

The Future of Litecoin

At the moment, all alternative coins – including Litecoin – are highly dependent on the price of Bitcoin. The market simply has not achieved widespread adoption, and no coin even comes close to challenging Bitcoin’s financial position at the top of the heap.

This may very well change as the market grows and adapts, and Litecoin appears to have carved out a niche for itself as a recognizable and widely used medium of exchange for alternative coins. There is a few other projects with this stated goal, but none can boast the pedigree or the market capitalization of Litecoin. Furthermore, Bitcoin and Litecoin share heavy coding elements, and so projects explicitly designed for one coin or another are often interoperable.

Litecoin also has a surprising number of dark-horse elements in its favor. One is Litecoin’s growing acceptance on the so-called dark web. This is the very same vehicle that pushed Bitcoin to prominence via the aforementioned Silk Road. Litecoin traffic makes up about 30 percent of dark web transactions, second only to Bitcoin. While this might seem like a rather unsavory route to success, dark web adoption is the same portal Bitcoin used to get mainstream acceptance. If nothing else, it works as a proof of concept; while Litecoin certainly has some security and anonymity vulnerabilities, guaranteeing it can’t stay in the dark forever, its use as a currency is tried and true. In other words, if it works on the dark web for buying sundry illegal or unethical materials, it should work just fine in legitimate marketplaces.

Litecoin is also popular in China, and many market observers believe that China and Asian markets in general will lead the next big wave of cryptocurrency adoption. The Chinese and Korean governments have both loosened their stance toward cryptocurrencies in general, opening the door to potentially billions of new investors. Litecoin boasts a more accessible price point – for the time being, anyway – than Bitcoin, making it more attractive to new investors who want to own an entire coin.

The only big negative in the Litecoin arena is, ironically, its similarity to Bitcoin. As a cheaper, faster Bitcoin, Litecoin presents investors with major advantages over the current king of crypto. The next generation of altcoins, however, are purpose-built to replace Bitcoin in a variety of arenas, from pure currency to the Internet of Things to artificial intelligence to digital platforms. Litecoin may very well supplant Bitcoin in some areas, but it will be hard-pressed to work as a catchall solution for the hordes of alternative coins looking to take its place. For virtually every Litecoin use case, there is an altcoin that does it better, faster, or more cheaply.

Only time will tell if Litecoin’s nameplate value will overcome these challenges. After all, perfection is often the enemy of the good, and Litecoin just might be good enough to retain a foothold in the crypto world for years to come.

As of August 2018, the cryptocurrency market as a whole is still suffering from the effects of the so-called Long January, a months-long hangover stemming from the surprise December 2017 runup to all-time-high prices. In the December–January time frame, Bitcoin crested $20,000 per coin, while Litecoin reached a high-water mark of $366.

The disparities between the two coin’s market fundamentals couldn’t be starker. However, both BTC and LTC – alongside ETH – are cornerstones of the exchange base pairing market.

This isn’t immediately apparent from the coins’ 24-hour volume. Bitcoin’s 24-hour volume in July 2018 was about $5.2 billion, dwarfing Litecoin’s $264 million. In fact, more Bitcoins in terms of U.S. dollars are moved each day than Litecoin’s entire market capitalization. Litecoin also faces stiff competition from non-Bitcoin forks. The number 2 and 3 positions on CoinMarketCap as of July 2018 are occupied by platform coin Ethereum and foreign currency lubricant Ripple, respectively. Both boast market caps many times that of Litecoin, which settled into the number 6 global market capitalization position.

Litecoin’s relative lightweight status in terms of sheer market size belies its importance to the market as a whole. With much faster transaction speeds, Litecoin has become a staple of day traders and other folks who need to convert between cryptocurrencies quickly to take advantage of sudden buying opportunities. In the time it takes for a Bitcoin transaction to process, a given day trader might see their gains evaporate as nimbler Litecoin users convert and finalize their trades. Litecoin, then, has become less of a competitor to Bitcoin in the pure currency and value-storage arena and become an effective medium for shuttling alternative coins from one place to another without the associated hassle of first converting to Bitcoin.