Inside Aavegotchi: The Project Melding DeFi & NFTs Atop Ethereum

Currently the second-largest project in decentralized finance, lending and borrowing protocol Aave has been one of the DeFi ecosystem’s fastest risers and biggest stars in 2020.

That this is the case isn’t surprising, either: the Aave team has developed and delivered innovations at a rapid pace this year, e.g. interest-bearing aTokens like aLINK, flash loans, credit delegation, and more.

That said, Aave’s builders aren’t ones to slow down or stop expanding. One of the project’s latest advances has been beyond DeFi proper and into the realm of non-fungible tokens (NFTs) via Aavegotchi, a new spinoff game loosely-inspired by Tamagotchi that blends elements of the DeFi and NFT arenas in novel ways.

In today’s post, then, let’s explore what this up-and-coming, DeFi-native game is all about.

The Aave team first announced Aavegotchi in early July 2018 as a project for “gamifying your DeFi experience” by “helping you bring your yield to life with various game mechanics around aToken yields.” The game would feature things like:

Days after the project’s announcement, the team brought on cryptoartist Xibot as the project’s designer; the talented creator immediately got to work fleshing out the game’s signature pixelated style, as depicted below.

Around this same time, the team launched social media accounts and continued solidifying the project’s whitepaper, DAO structure, and tokenomics.

I've been interested in ideas combining DeFi + NFTs. I think what @aavegotchi is doing with gamification of DeFi is really neat. Each Aavegotchi represents DeFi collateral earning yield on @AaveAave but you can also battle them, level them up & equip wearables that change traits pic.twitter.com/Wow4aaDwy0

In late July, Aavegotchi’s creators released the project’s “litepaper,” which outlined for the first time the general tokenomics of $GHST, the game’s utility token.

In short, the $GHST token “must be used to purchase Portals, wearables, and consumables.” The latter two things are straightforward enough: they’re tokenized boosts for your Aavegotchi ghosts. But what about Portals?

In the Aavegotchi gaming universe, humans must traverse from the “Ether Realm” to the “Nether Realm” to obtain Aavegotchis. To do so, Portals must be used, and Portals can only be purchased via $GHST. Moreover, every Portal contains 10 different Aavegotchis with different random traits, and only one of these can be minted per portal.

Notably, a cut of all $GHST transactions around the Aavegotchi ecosystem are sent to the AavegotchiDAO’s treasury, a community-run organization that votes with $GHST tokens to steer the Aavegotchi project going forward.

On September 10th, the Aavegotchi team published the specifics of how $GHST would be distributed and how a DAICO (“decentralized autonomous initial coin offering”) would help to facilitate the token’s public sale.

After this, a public sale would open offering an unlimited amount of $GHST along a bonding curve. A bonding curve offering uses a unique mathematical formula to determine a token’s supply and price. This model allowed Aavegotchi to customize and automate their token offering on-chain while also opening up instant markets for $GHST.

Notably, the offering was specifically structured as a DAICO, which is a “DAO governed token sale” that will ultimately let the Aavegotchi community decide how the raised funds will be used.

On September 14th, the Aavegotchi team formally launched the $GHST DAICO, opening up the token to be bought by everyday users in the cryptoeconomy. Community members also immediately set up an ETH/GHST liquidity pool on Uniswap, paving the way for anyone to buy the utility token.

Within hours of the launch, more than 1,000 Ethereum addresses had already acquired the token.

As the Aavegotchi team explained in their 9th community update that week:

“Immediately after the presale ended, trading on the token bonding curve opened at 0.2 DAI each. Within minutes, millions of DAI worth of liquidity flowed into the bonding curve, minting new GHST supply and raising the price … As of publishing, GHST has a total circulating supply of 25,107,602.”

Powered by Aragon’s DAO tech, the first rendition of AavegotchiDAO was launched in order to facilitate the $GHST DAICO as well as ecosystem efforts around community management, marketing, and governance.

But from the get-go the Aavegotchi team have had their eyes on a more advanced AavegotchiDAO 2.0 release. That’s why the project’s creators are surveying solutions like “Matic, xDAI, and others” to create their ideal DAO that is on-chain, affordable to use, and that can readily interact with external Ethereum smart contracts.

“AavegotchiDAO 1.0 is just the beginning … Ultimately, we want Aavegotchi to be community-owned, and we’re currently exploring the tech stack where our DAO will live,” the team said earlier this month.

All Eyes on Mainnet

On September 18th, Aavegotchi released a “Road to Mainnet” post. Therein, the project’s builders charted out their key development plans through Q1 2021. 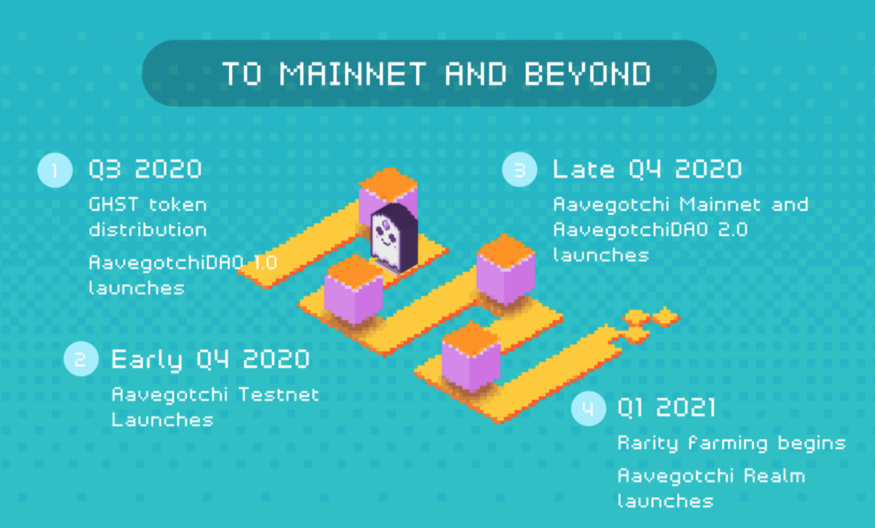 The Aavegotchi system has already been deployed on Ethereum’s Kovan testnet, so next up now is 1) the mainnet release of Aavegotchi, and 2) the launch of AavegotchDAO 2.0 in Q4 2021.

“Chainlink VRF offers developers the unique capability of incorporating an on-chain source of randomness that can be verified as authentic by end-users,” Chainlink explained earlier this year.

Accordingly, this solution will be used to ensure that Aavegotchi’s ghosts have truly randomized trait generations, as the team said:

“Each Aavegotchi summoned needs to be randomly generated with a massive variety of intrinsic qualities, including visual traits, wearables, and collaterals. These unique Aavegotchi are then able to again engage Chainlink VRF for many of our mini-games and AavegotchiDAO experiences.”

Relatively speaking, DeFi is still small and the NFT ecosystem is even smaller.

Yet it’s undeniable that both sectors have swelled in 2020 as strong projects have proliferated and bullish sentiments have returned to the cryptoeconomy. What we haven’t seen to date is a high-profile DeFi + NFT meld, of which Aavegotchi will be the first once it hits the Ethereum mainnet.

That said, Aavegotchi is going to be a first-mover in the arena at a time when most other DeFi projects (with the exception of Maker) haven’t paid much attention to NFTs. That’s notable, for sure.

It’ll be interesting to see where Aavegotchi goes from here, but the project has promise as it’s seeking to gamify DeFi. DeFi is already compelling as is, but when you add fun gaming elements like Aavegotchi does, then you might just have a recipe for something special.

Of course, only time will tell if this DeFi + NFT game will take off. However, there’s no question that it’s a trailblazing project as this crossroads, and it’ll inspire more projects to follow along with related innovations.

Disclosure: I purchased 105 $GHST for ~$50 USD on the day the Aavegotchi DAICO launched. I intend to use this small sum of tokens to trial things around the Aavegotchi ecosystem in the months ahead.