Excessive volatility is probably one of the main obstacles standing in the way between cryptocurrencies and mass adoption, however, new hope emerges in the market of digital assets as bitcoin (BTC) recorded the lowest volatility rate by far, indicating that the cryptocurrency might be slowly acquiring increased stability in oppose to previous market trends.

According to Dow Jones Market Data on bitcoin’s volatility, the top traded cryptocurrency showed the least volatile trading range by far, opposing high volatility levels as previously seen, especially during major dips in the market back in November 2018. Bitcoin reached 7.8 percent in volatility, which is a rather narrow trading range, even more so when compared to the previous lowest volatility score that ranged to 21.2 percent, as recorded back at the beginning of 2017.

The average volatility rate in the period from October 2013 to October 2018 is set at 53.7 percent, which makes the progress even more obvious. As bitcoin has set another record, this time positive, analysts and people from the industry consider that the case of bitcoin reaching the lowest volatility by far may be a sign of positive changes as well. 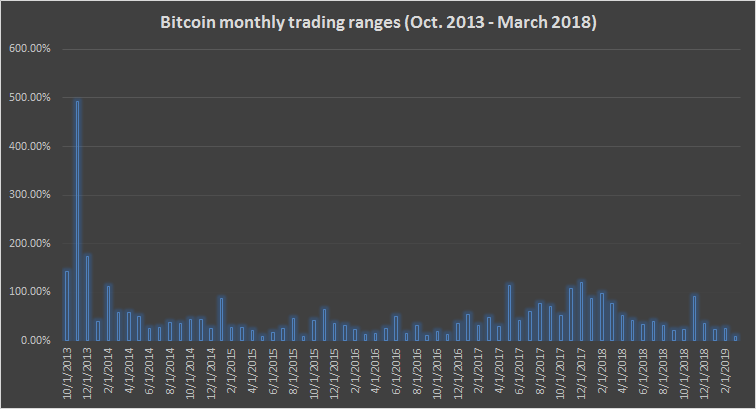 Even though cryptocurrency sceptics such as Nouriel Roubini, an economist who had debated on the fact that excessive volatility which included 100 percent trading ranges as seen back in 2017, believe that bitcoin and digital assets based on the same underlying technology have multiple shortcomings described in Roubini’s Testimony.

The CEO of a UK-based cryptocurrency exchange CoinCorner, Danny Scott, believes that declining volatility should have positive effects on the general interest in cryptocurrency.

Opinions are divided however, Roubini remains firm about his views on the cryptocurrency market in the testimony for a Senate hearing that took place in October.

The testimony is called “Exploring the Cryptocurrency and Blockchain System” and it clearly pushes a negative momentum for cryptocurrency market as Roubini writes that “Crypto is the Mother of All Scams and (Now Busted) Bubbles While Blockchain Is the Most Over-Hyped Technology Ever, No Better than a Spreadsheet/Database” in form of a subtitle for his testimony.

Roubini further describes bitcoin as a poor store of value due to the high volatility levels that often reach up to 30 percent in a single day, which in Roubini’s opinion represents one of the main reasons why bitcoin adoption is poor among merchants alongside the lack of stability in the market of digital assets.

Danny Scott is confident that more people will decide to invest in bitcoin with the declining volatility and increasing stability, which should consequently push BTC closer to adoption.

Bitcoin’s Low Volatility May Not Survive for Long

Despite high hopes that bitcoin’s latest record provided to crypto enthusiasts and market watchers who are positive about cryptocurrency market, host of Tales from the Crypt, Marty Bent, shared that he doesn’t believe that the low volatility levels will resist market trends, while Bent stresses out that declines in March are more likely a consequence of “exhaustion” in the market of digital assets than a sign of maturation.

Bent further added that it is less likely that an asset such as bitcoin has the ability to emerge with perfected scalability, sufficient decentralization and no volatility, not even in the period of a decade since its creation.

However, Tales from the Crypt host still believes that the market is on the right track, adding that once the network has a sufficient amount of value, volatility levels should likewise reach a satisfying dose of stability, although this process may take years.