Meet The Blockchain Companies Hoping to Disrupt the Publishing Industry

Publishing, like most media industries in the digital age, is struggling to find a way to redefine itself. With more media moving to online and electronic formats, traditional distribution and revenue models aren’t quite cutting it anymore, which is why blockchain systems are getting a lot of attention from authors and content creators.

While different proposals have different mechanics, the core idea behind them is that a lot of the things that traditional publishers do, like managing copyright and licensing, distributing profits, and facilitating collaboration, could easily be done in a less centralized way using smart contracts and a blockchain record. 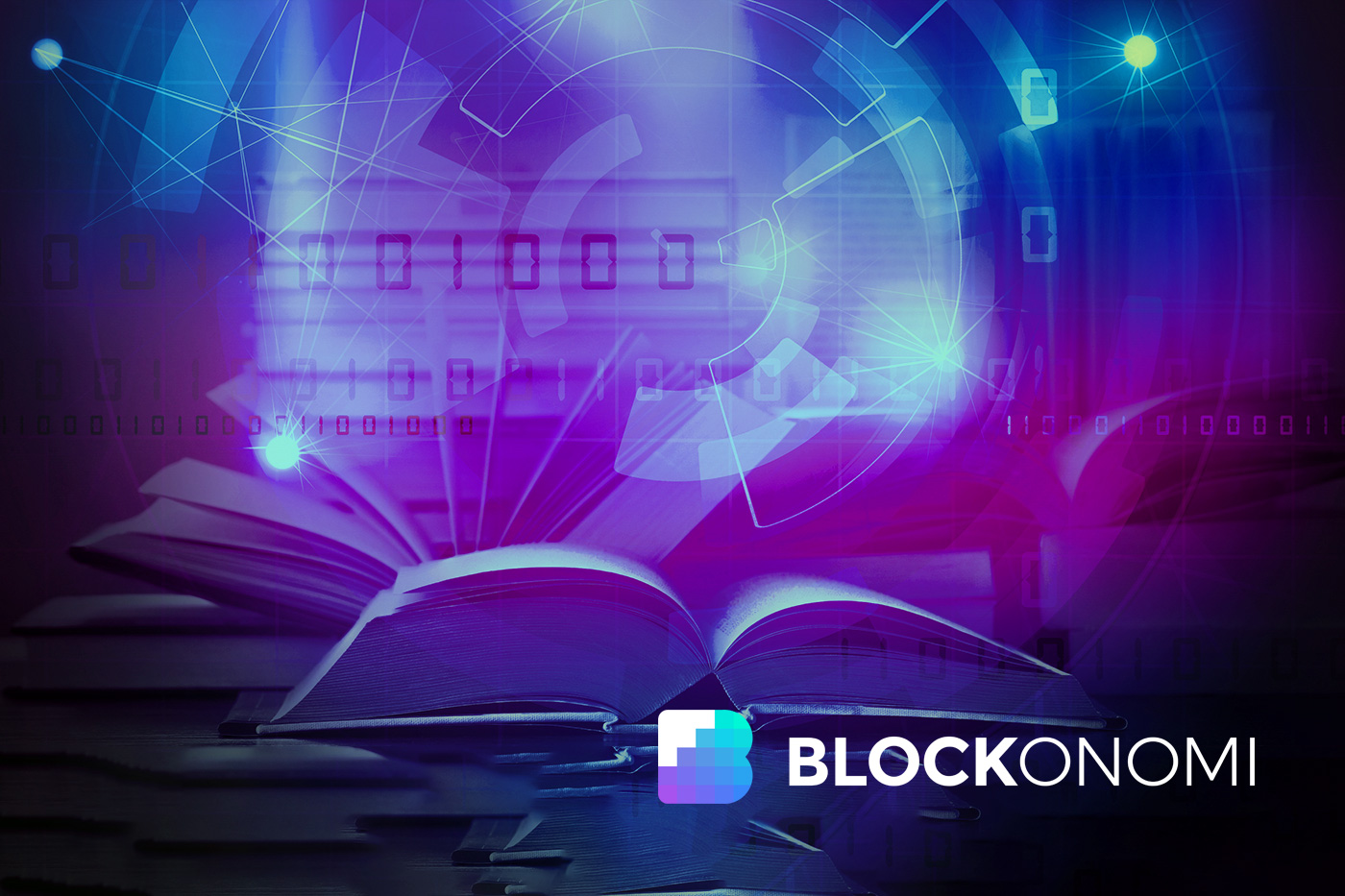 What is “Publishing,” & How Could it be Better?

A lot of things can be published: books, magazines, video games, music, software, apps—the act of “publishing” something basically just means to take a created product, prepare it, and make it available for consumption. If you’re talking about the publishing industry, you’re typically talking about print media distribution, though many of the improvements that could be applied to print publishing could easily map over to other fields that deal with intellectual property, media distribution, collaborative work, revenue-sharing, et cetera. To keep things simple, however, we’ll mostly be talking about traditionally printed media, like books, academic journals, and newspapers. There are a few major things that blockchain solutions are looking to address here:

Managing copyrights is a big issue in the media industry, and blockchain technology probably isn’t going to make an entire field of law obsolete. There will always be lots of issues over who has the right to publish certain things and what constitutes intellectual property infringement, but if there’s one thing blockchains are good at it, it’s keeping track of owns what.  Most publishing-oriented blockchain projects are pushing more efficient, automated copyright-tracking and direct author control over copyright policy as their primary use case.

People wouldn’t be writing all these books without money being involved at some point. Academics are an exception, though: many spend years working on papers that end up in highly profitable journals with no payout aside from a little more professional capital and presumably a feeling of satisfaction—but blockchains are working on that one too. Book publishers have been struggling with low-priced e-books and high overhead for a while, and ad/subscription-based revenue models for newspapers and magazines have met with mixed results. Times are tough all over, but even though the internet hasn’t been great for institutional gatekeepers, it’s enabling new, potentially blockchain-based models.

Publishing isn’t as labor-intensive as it once was (a single dedicated author can now get their own book out there if they want to), but getting high-quality products to market still requires a lot of people to come together and participate in creation, editing, design, marketing, management, printing, and more. Traditionally, this has all been managed by large publishing houses that can afford to do all these things at a large scale, but online collaboration tools mixed with blockchain smart contracts offer a less-centralized solution that can allow work to be tracked and paid for without needing someone in the middle doing the legwork.

Aside from having a pretty clever name, this project from Montreal startup Scenarex checks most of the boxes on the publishing-chain wish list. It allows authors complete control over the publication process, gives them a full suite of analytics to track their book’s reach and impact, streamlines attributions and royalty distribution, and enables ebook resale. Every book file also comes with a smart contract containing the author’s parameters, like price, number of available copies, royalties, resale permissions, et cetera. 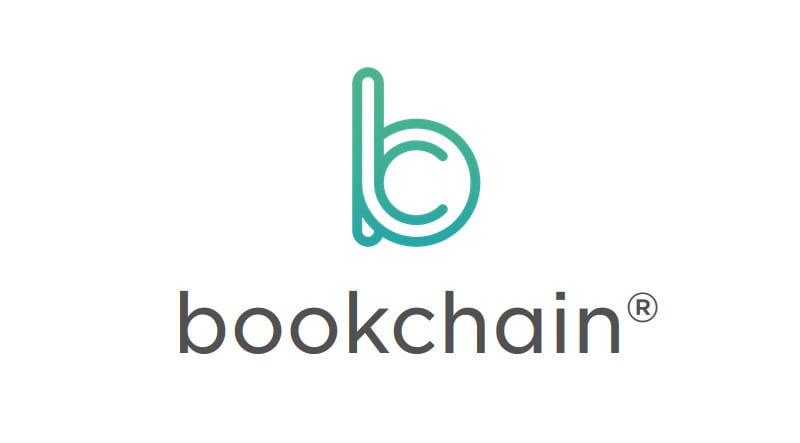 There are small network fees, including a gas fee, since Bookchain runs on the Ethereum network, but users don’t have to be at all familiar with cryptocurrency or blockchains to purchase and download a book. While the system runs on the blockchain, it supports payment in fiat currency. It’s designed to be user-friendly on both the user and the publisher end, which is an important step for any blockchain project that’s looking to actually make it in the general market.

A lot of authors depend on advances from their publishers to support them financially while they do all the up-front work of actually creating a book. Publica is aiming to crowdsource this process and put it on the blockchain along with a distribution network and general e-book platform. Authors using the platform can set up ICOs for their books by selling tokens at certain prices and using the proceeds from these token sales to finish their project. 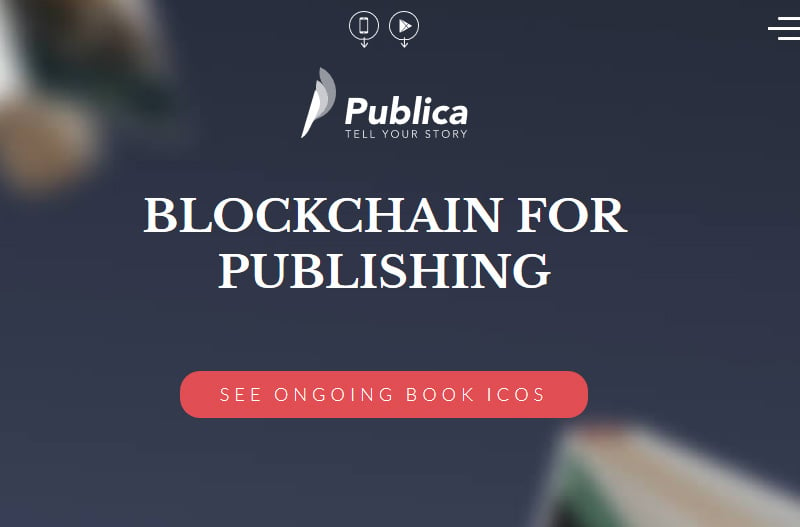 Once the book is published, in a Kickstarter-like model, supporters will get their copies of the book and the author/publication team will continue to collect royalties on future sales. The books themselves will be tokenized and stored in readers’ wallets, giving them full ownership, including resale ability, though the author will receive part of the proceeds each time their book is resold, meaning that the development of a secondary market won’t hit the author too hard.

Academic publishing is a strange industry. The journals don’t pay the authors for their work, but if anyone wants to read the journal, they’d better hope they have access to a well-funded university library.  At the same time, researchers aren’t left with much choice: if they don’t publish papers in those journals, they’ll have a hard time advancing their career. The bottom line is that academic publishers can make a lot of money by not paying their authors and demanding exorbitant subscription fees from university libraries that need to keep their schools up-to-date with the latest research. 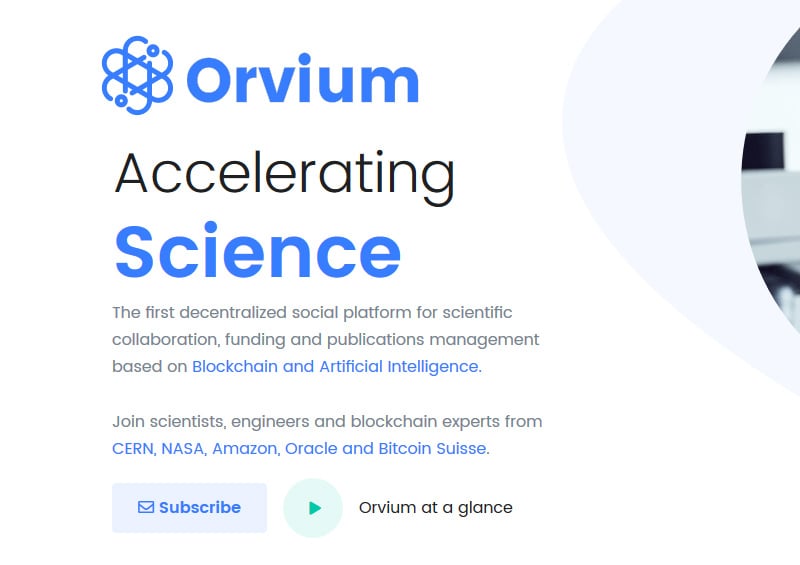 Orvium, founded by former CERN and NASA employees, is trying to put the academic publishing process on the blockchain. The peer review process will remain in place since this is an important part of ensuring that academic research is reliable, but the reviewers can set prices for their services. In turn, authors can decide if they want to charge for access to their work, or if they want to make it completely open-source.

Orvium itself will be completely free for anyone to access—an academic idea-sharing framework with tools for research coordination, funding, prize creation, and many other aspects of academic research that are currently controlled by highly-centralized institutions. Research, data, and licensing will be under the full control of the authors, but the platform also places an emphasis on transparency, tracking the full lifecycle of each manuscript, from submission to review to licensing and citations.

Po.et isn’t exclusively a publishing blockchain, but rather focuses on creating a common metadata format that can be used as a universal ledger for creative digital works.  Every digital asset uploaded to the Po.et marketplace gets its own “Proof of Existence” that serves as the author’s certificate of ownership. This certificate can be accessed by publishers via Po.et’s “Frost” API, enabling them to see whatever data the author allows them to, like a work’s origin, licensing terms, and authenticity. 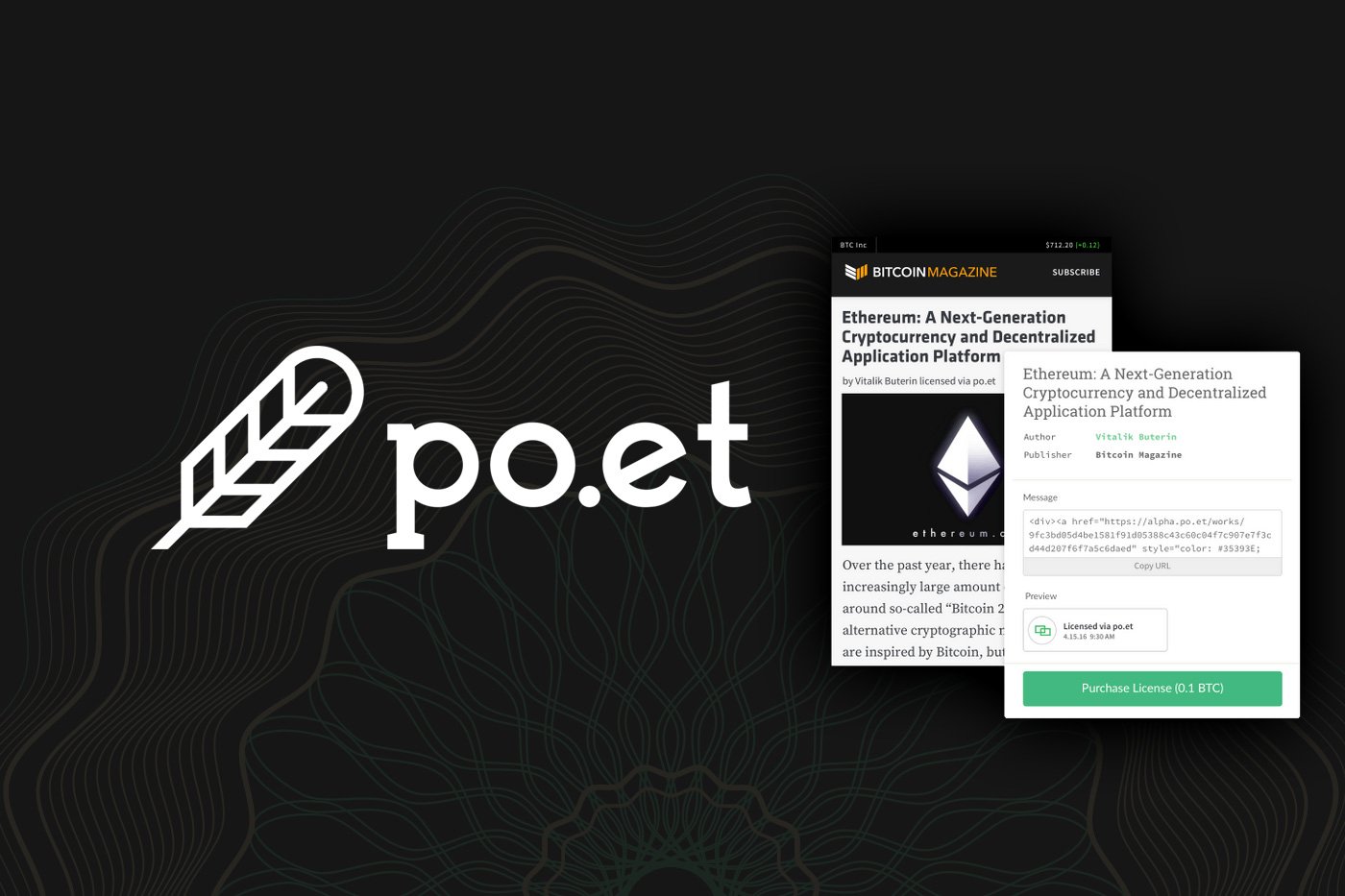 Proofs of existence can be applied to pretty much any digital media, from newspaper articles to videos, making it a much more streamlined way to manage digital content ownership than many of the current centralized solutions, which depend on content creators to manage accounts across several different services in order to distribute and license different kinds of media.

As per the norm in the blockchain space, there are too many interesting ideas to give sufficient attention to every single one, but there are certainly projects that deserve a mention alongside the above representative sample:

Blockchains are for Word Nerds too

An English department might be the last place you’d expect to hear blockchain technology being discussed, but the fact that it’s inspired such a rich ecosystem of ideas and projects is evidence to the contrary. Being fairly paid and making sure your work remains your own are basic problems that have become a struggle for many in the creative community, and blockchains have the potential to at least partially mitigate those issues.

The biggest obstacle here, though, is that the overlap between people who are comfortable with blockchain technology and people who work with words for a living isn’t especially huge.

This is an issue echoed across most of the blockchain space, though: people don’t use it because it’s harder than the alternatives. Any solution that does succeed, then, will have to be streamlined enough to accommodate a traditionally non-techy user base.

There’s clearly a hunger out there for something better, something that can make the content creation, distribution, and management process more efficient, connecting creators and consumers more directly.

As in so many other industries, the idea of blockchain seems to have released a flood of creative energy, and as an already-going-digital industry, publishing seems ripe for the change.