The goal of Cardstack is to make the decentralized web more accessible for the average person on the internet. This includes smart contracts, blockchains, and dApps. Cardstack sees itself as a hub that makes it possible for the average person without much or any technical knowledge to experience decentralization. With Cardstack, all the apps and dApps are in a single, convenient spot with a single token, making it simple to see the possibilities associated with decentralization. 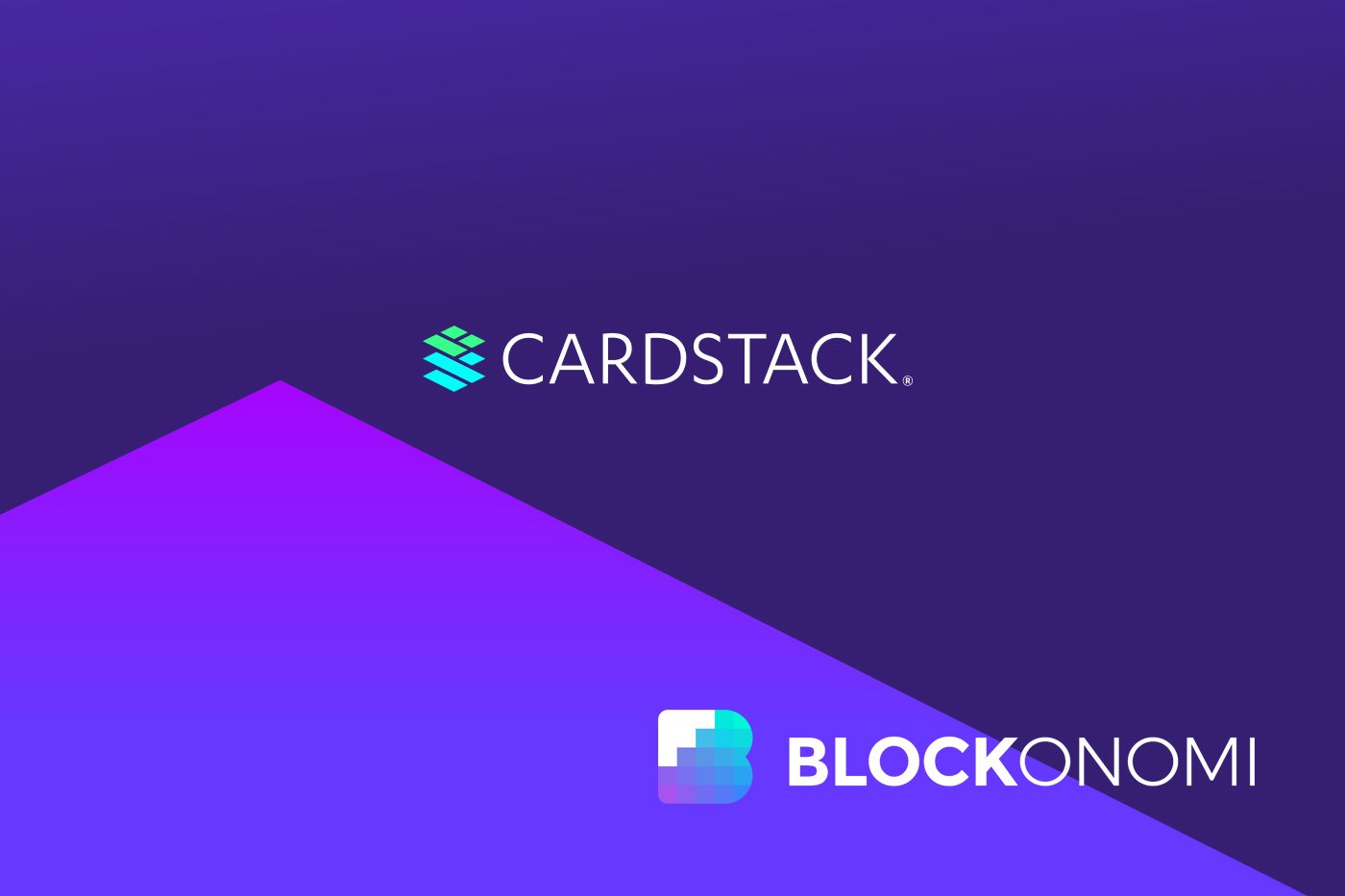 The team at Cardstack recognizes that it is challenging to access and manage traditional centralized apps or even dApps since the industry is so fragmented. Because of the fragmentation, users must use multiple subscriptions or tokens if they wish to use more than one or two apps or dApps. This is particularly challenging in the case of dApps since managing a crypto portfolio has its own technical complexities.

Cardstack aims to overcome these challenges by putting all the apps and dApps that people use in a single easy-to-use platform. This makes it possible to mix and match favorite features of various apps. It also makes it simple to use a single token to explore software or dApps, including using trial versions.

The Cardstack team indicates that its technology is a huge step forward for the blockchain at every point in the stack of software thanks to the delivery of tools that give everyone access to the decentralized internet. 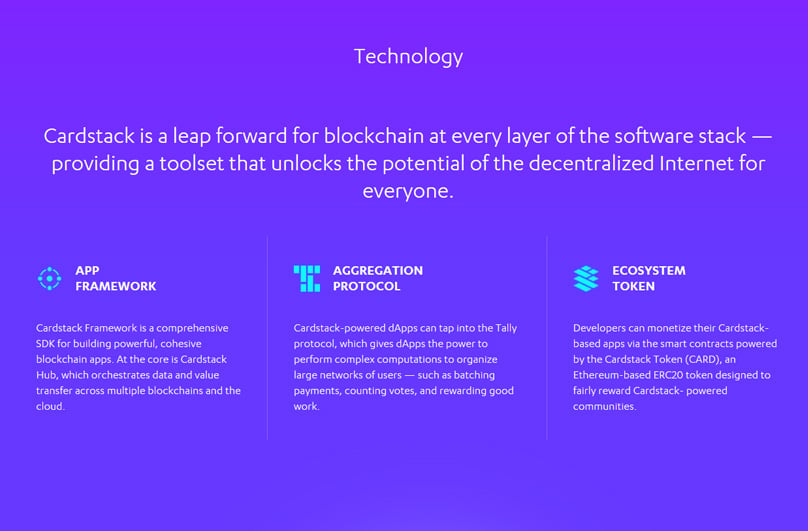 The Aggregation Protocol or Tally Protocol lets dApps powered by Cardstack tap into it. This protocol gives those dApps the ability to perform a range of complex computations for organizing the vast user network. These computations can allow for functions like rewarding good work, counting votes, or batching payments.

The Ecosystem Token is the Cardstack Token (CARD) that lets developers monetize the Cardstack-based apps that they create. This is done via smart contracts that run on the CARD token. The ERC-20 token is Ethereum-based. It was created specifically to reward the communities powered by Cardstack in a fair manner.

The software stack has the Ethereum blockchain at the base, with the Ecosystem token of CARD above it. Above this, you find the Aggregation Protocol or Tally, with the App Framework or Cardstack Hub on top. At the very top of the stack are the Next Gen Blockchain Applications. 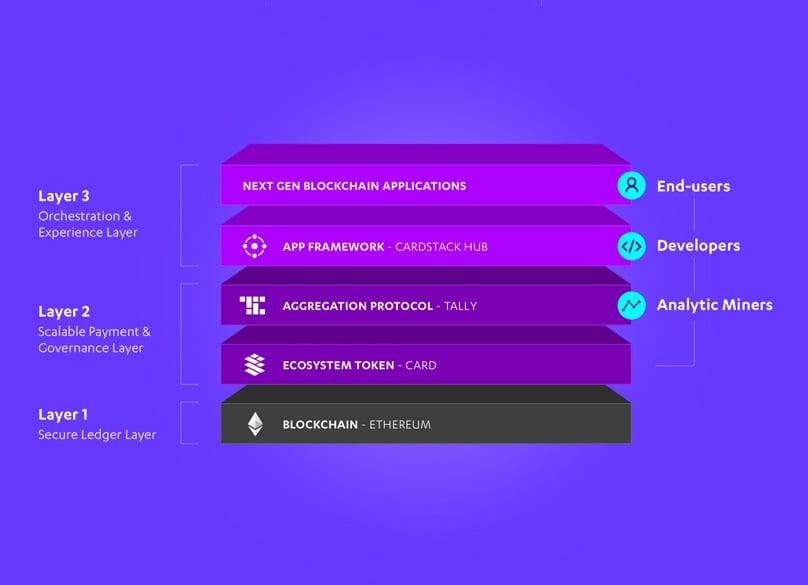 Cardstack approaches decentralization via the ability of self-sovereign users to act as a hub. This means that each user controls their software stack that holds the flow of interactions between services and applications on networks with varying topologies. The Cardstack Hub can connect to governments of a hierarchical nature, centralized enterprises, fully decentralized cryptocurrencies, decentralized education with on-ramps, federated media, multi-cloud social factors, and decentralized knowledge with all-ramps.

Within the Cardstack Hub itself, there are various functions, such as storing, analyzing, querying, configuring, deploying, publishing, notifying, browsing, chatting, workflows, automation, searching, and versions.

The platform also has a whitepaper, vision paper, reward paper, and paper on tokens and contracts to provide more detail on the functionality.

How Does Cardstack Help End Users?

For end users, Cardstack offers the ability to easily mix and match various cloud apps and dApps without complications. The Cardstack Hub also lets end users create amazing combinations of apps and workflows. End users can use a single token, CARD, that then creates individual retainer agreements with each service that you require. No cryptocurrency expertise is needed, so you can get started very quickly using fiat currency. Cardstack also lets you stay in control of your data at all times, keeping your data sovereign or opt to send it wherever you want thanks to the card-based user experience.

How Does Cardstack Help Developers?

Developers can use the comprehensive SDK from Cardstack to build their own powerful and extensible applications. They have access to a library filled with powerful drop-in functionality. The off-chain aggregation of Cardstack can also improve app experience. Developers do not have to worry about fair pay thanks to the Cardstack algorithm for payment and governance that is community-run. Everything is 100 percent open-source, and developers even get reimbursed for their material costs.

How Does Cardstack Help Analytic Miners?

Analytic miners can take advantage of Cardstack to create wealth distribution in a fair manner via their ability to power community-run algorithms. These miners get to protect the system from threats like spam, bad-faith actors, and outliers. Miners earn Cardstack Tokens as fees that they can then either circulate back into the ecosystem or hold onto. Finally, they are compensated via the sortition scheme which prevents any single party from controlling the reward functionality.

According to the Cardstack platform, the Minimum Viable Product phase of the project is already completed in terms of user experience, orchestration, integrations, and smart contracts. The consensus MVP is still under progress but almost complete.

In terms of user experience, Cardstack is working on Card Space: Community Contribution Management Features, which is Phase 3. The project is in Phase 3 for orchestration, Cardstack Hub: Index & Query, which will be followed by Phase 4, which is Cardstack Hub: Free-to-Use Peer-to-Peer Deployment. Integrations are also in Phase 3, Blockchain Plug-ins: More EVM Smart Contracts, Oracles. Smart Contracts are similarly in Phase 3, CARD with Software & Services Coupon: Universal “Gas” Mechanism for Blockchain- and Cloud-Based Utilities.

Cardstack aims to help developers, end-users, and analytic miners by providing a decentralized hub where it is possible to access a range of dApps and applications. This provides convenience by finding everything in one location and accessing it all with a single token, CARD.