Ethereum Losing the dApp Game, Should ETH Investors be Worried?

For most of its life, Ethereum (ETH) has been at the forefront of the smart contract and decentralized application (dApp) game. It does, after all, sport the biggest brand name out of its cryptocurrency subset, largest developer backing, and the most accolades from Fortune 500 institutions, like JP Morgan.

But, new data suggests that the platform, launched by a majority Canadian group of entrepreneurs and hackers, is starting to fall behind its up-and-coming rivals — EOS, Tron, and their ilk. According to a recent report from Dapp.com, a crypto analytics provider, Ethereum’s smart contract scene is starting to trend downward compared to its competitors. By far, Ethereum has the highest total number of dApps, 1,633 as of the end of the second quarter of 2019; EOS’ count comes in at 435, and Tron’s at 412. But, as the analytics startup explains, rivals of the blockchain have seen much more usage from a transactional volume perspective. 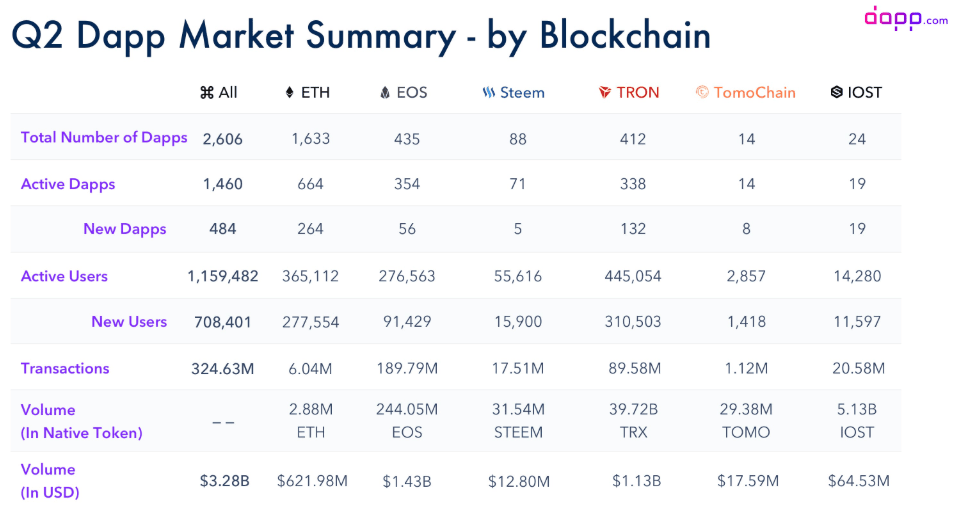 More specifically, the number of transactions Ethereum’s applications have seen in Q2 was a mere 6.04 million. While this sounds like a lot, it isn’t, especially considering that the chain now processes over one million transactions each and every day. What’s more, EOS registered 189.79 million dApp-related transactions, while Tron logged half of that, at 90 million — a figure that still may put Ethereum “to shame”.

That’s not all. The value of the cryptocurrency siphoned through smart contracts was around double that of Ethereum on both EOS and Tron, which both saw over $1 billion worth of their native cryptocurrency go to work.

According to the report, the underperformance of Ethereum smart contracts relative to ETH’s place in cryptocurrency’s de-facto hierarchy may have something to do with the market. Dapp.com’s researchers wrote:

“User activeness has a strong correlation with ETH price – the higher the price, the more Ethereum dapp users. More token holders have also been converted to dapp users, as the price has increased since mid-May 2019.”

As you may be aware of, Ethereum has been underperforming Bitcoin and some other large-cap cryptocurrencies. Thus, it may be no surprise that investors are turning to other platforms due to the asset’s underperformance.

While some see this as a sign that Ethereum is on the decline, there is hope for the seminal smart contract blockchain. Firstly, the code specifications for the first phase (“phase zero) of the Serenity (Ethereum 2.0) blockchain upgrade were recently “frozen”.

As reported by this outlet previously, this means that the transition from proof of work to proof of stake has begun, which has been a hope for many of the project’s developers since day one. This freeze means that the next generation of Ethereum is rapidly approaching, with the Ethereum Foundation and its developers eying an early-2020 release for the final product.

For those unaware, Serenity has been described by Ethereum creator and Canadian wunderkind Vitalik Buterin as  “a way to bring technical improvements, like PoS and sharding, together to improve the Virtual Machine, Merkle Trees, the efficiency of the protocol, and a whole bunch of small technical things that you have never heard of.” Per Buterin, all this is being done in a bid to create a “next-generation blockchain” that will be hundreds of times faster and scalable than Ethereum’s current iteration.

Most importantly, however, countless corporations have their eyes on Ethereum, or are even using the platform for pilot programs. As covered extensively by this outlet, companies like Ernst & Young, JP Morgan, Samsung, Cloudflare, among other companies are working closely with the blockchain. It would be fair to say that EOS and Tron don’t have those same relationships.