Factom are creators of products which change how businesses store and share their data in a safe, honest and transparent way. Using Factom, private data is kept private and forgery, fraud and corruption become a threat of the past.

Adding the Factom open source data layer, it is possible to store millions of records with a single hash on the blockchain and it gives you the tools to audit those records in real time.

“We started Factom to build a more honest and transparent world. We take a pretty simple approach: create software that makes it impossible to change the past and point that software at places where it solves valuable business problems.” – Peter Kirby, CEO

Read our beginner’s guide to Factom to find out more about the promising blockchain-based technology and what it could mean for businesses. 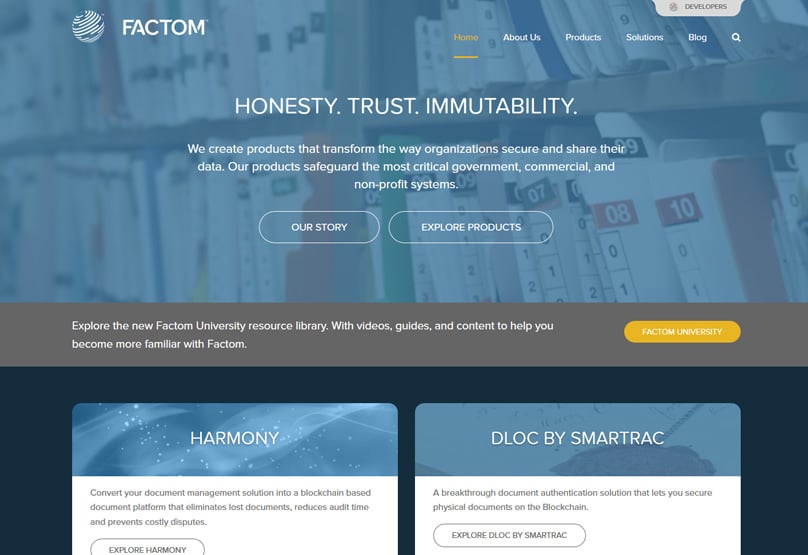 Important data stored on centralized databases are owned by people we must trust and are prone to hacker attacks which puts company data in a vulnerable position. The Bitcoin blockchain presents an excellent, and much more secure, solution for record keeping but it can’t handle vast amounts of records due to restrictions with speed and storage size. 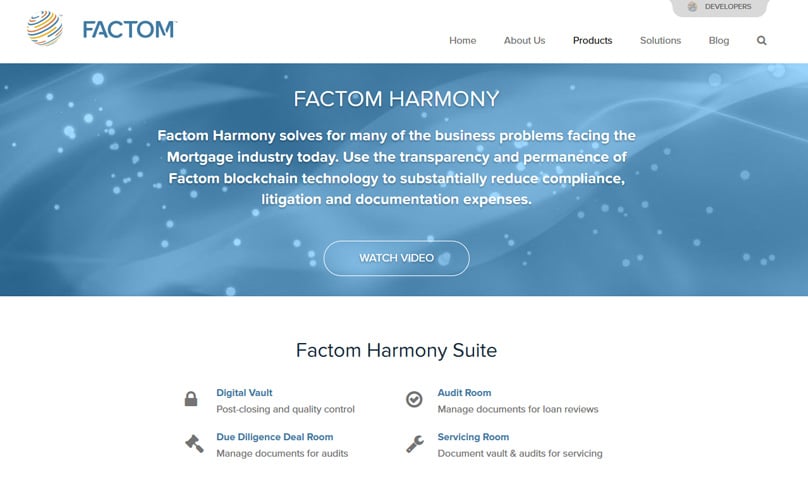 Factom eliminates the possibility of hackers even being able to get through the front door, as their bulletproof identity ledgers and multi-factor authentication make it impossible for anyone to derive root access into company records or to create a fake administrator account.

Using a decentralized database with end to end encrypted storage, Factom puts records into different locked boxes rather than all in one place. Access can be granted to different areas on an individual basis, rather than open to all administrators, and Factom keeps track of who is allowed into what so that any changes are quickly identified and corrected.

From the Factom data level, records are hashed to the Bitcoin blockchain using cryptography which is impossible to hack, and then distributes that information across thousands of computers across the world. This means that the loss of one server won’t bring down the system, making it even more secure.

Who can use Factom?

Factom is an open source platform, meaning that anyone can use it to build an honest and safe system with secure blockchain technology to keep records safe forever. When you use Factom, there is a nominal fee in its factoids cryptocurrency which reduces the risk of large quantities of spam being hashed into the platform on a regular basis.

How can Factom be used in our day-to-day lives?

Through using Factom technologies, we could see a world where your personal medical records are private and secure, and only shared with doctors which you trust, and it could be possible to cast your election vote from your phone in a safe and fair way.

There is a huge amount of potential with the Factom data layer and blockchain technology, which can be applied to all our personal and private financial, identity, and real estate records.

Factom provides the platform to build safer and more secure record keeping on a global scale with three types of proof:

The Team Behind Factom

Factom is based in Austin, Texas and operates from additional locations Shanghai, Beijing, Honduras, London, and Sunnyvale, CA to meet the needs of global customers.

The original idea and conversation for Factom happened in 2014 between Chief Architect Paul Snow and Chairman of the Board David Johnston. They have a vision to push for transparent business practices with their products, and are striving to change the future through the software they build.

On top of that, they are a company who recognises the strength within their team and are building a workforce which is dedicated to changing the future.

“Factom culture encourages you to be the best version of you. Our people will always be our greatest strength.” – Abhi Dobhal, VP of Business Development.

In June 2016, Factom started a project with the US Department of Homeland Security called ‘Blockchain Software to Prove Integrity of Captured Data from Border Devices’. This revolutionary project will focus on the security of the digital identity for Internet of Things devices.

The ICO sale for Factom started on 31st March in 2015. Within the first 24 hours, over one million tokens were bought using Bitcoin.
Bitcoins for Factom are released in batches of 33%. The first 33% was available when Milestone 1 was reached, the second 33% went out upon Milestone 2, and the remaining 33% will be released once Milestone 3 is reached.

The currency used by Factom is called Factoids which initially cost around 12cents and are currently trading at around $25 per FCT ( as of 4th September 2017 ) with and all-time-high of $33. You can purchase FCT from Poloniex and Bittrex. You can create an address and download the Factom Federation wallet for storing them from the official website here.

Factom are changing the way companies can store and, most importantly, protect records forever. Hacks into large companies such as Sony, Target and JPMorganChase are becoming more frequent, making data and information increasingly more vulnerable.

By moving away from a centralized database and using a decentralized database with blockchain technology, the records that companies keep could be safe and secure without any risk. Cryptocurrency enables a business to have full control over all records which are hashed into the system, while Factom regularly analyses and assesses all records and quickly identifies and alerts the user to any security breaches which may be recognised.

Factom are committed not only to creating a successful product, but are pushing to make the storage of records safe and honest which could revolutionize business practice as we currently know it. On top of that, the Factom data layer alongside the blockchain technology could be used within many different industries to impact our own personal lives as well.

This method of record storage could dramatically reduce the possibility of our own financial or identity records being stolen, which could wipe out fraud and corruption forever. There is scope to change the way we keep our medical documents and how we can implement a voting system across the world which would wipe out corruption.

Factom’s products could stop hackers from ever being a problem, and could make the world a safer and more trustworthy place.

We think that Factom is a technology with huge potential and real-world use that solves some important problems in regards to data, immutability and trust.