Maker DAO is a decentralized autonomous organization within the Ethereum blockchain. Maker works to minimize the volatility of DAI, its stable token, compared to the U.S. dollar, with holders of MKR tokens governing DAI. 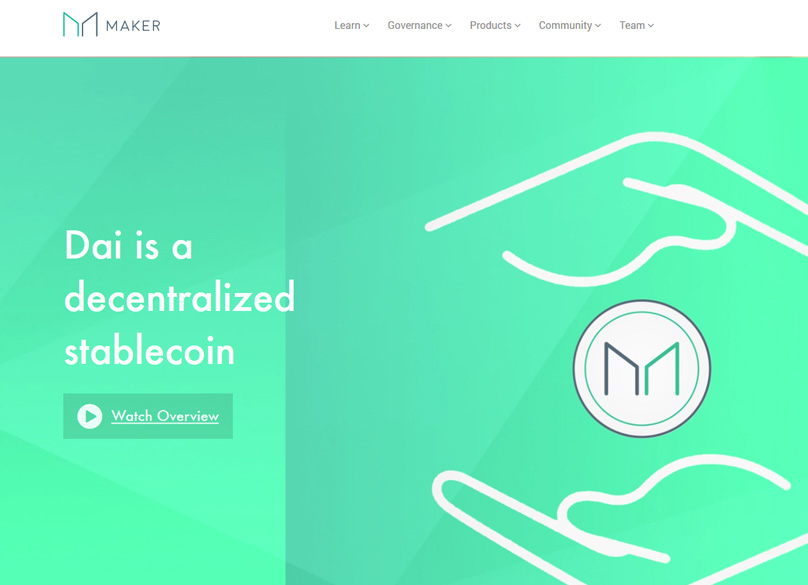 As mentioned, DAI is a stable token, like Tether. This means that it is a cryptocurrency that has its price stabilized in comparison with the U.S. dollar. The Dai Stablecoin System is a decentralized platform running on the Ethereum blockchain that creates the Dai. Maker hopes to use Dai to give everyone the ability to hold money that will maintain its purchasing power since it is stable against the USD.

With Maker, anyone can leverage their assets of Ethereum to generate Dai. After generation, you can use Dai just like you would any other cryptocurrency, including sending and receiving it or holding it for long-term savings. The process of generating Dai also develops the components necessary for a decentralized margin trading platform of a robust nature.

Unlike Dai, MKR has a volatile price because of its crucial role within the Maker platform and its supply mechanics. MKR is essential for the proper functioning of the Maker platform since it is a utility and governance token, along with a recapitalization resource. MKR is used to pay fees on the Collateralized Debt Positions (CDPs) used for generating Dai. Once the fees are paid, the MKR is burned. Holders of MKR are able to vote on business logic and risk management for the Maker system. 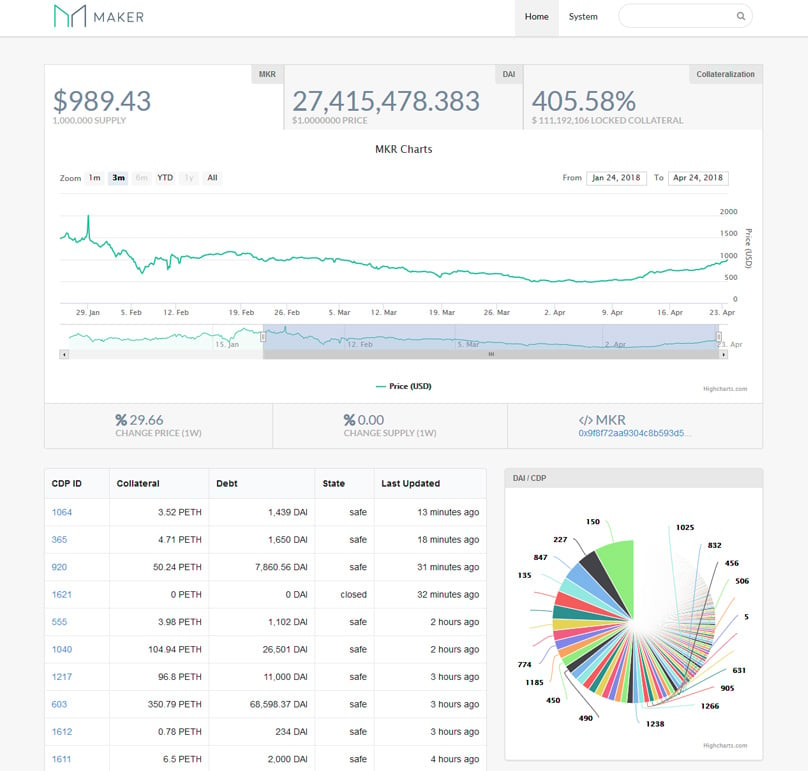 What Problem Does Dai Hope to Solve?

With Dai, the team at MKR hopes to overcome the extremely volatile prices of cryptocurrency. In the whitepaper, the team cites examples like Bitcoin falling 25 percent in one day or rising more than 300 percent in just one month. The team at Maker DAO feels that stable digital assets are necessary to let blockchain technology reach its full potential. Because of this, it introduced Dai, which is backed by collateral.

How Does Dai Remain Stable?

The team behind the project has several tools at play to help stabilize Dai in relation with the U.S. dollar. A large part of this is via Maker, the smart contract platform. Maker uses CDPs, incentivized external actors, and autonomous feedback mechanisms to stabilize Dai’s value.

What Are CDPs, and What Role Do They Play in Generating Dai?

Since the average person is not familiar with Collateralized Debt Positions, it is worth going into more detail about these CDPs. CDPs hold onto collateral assets that a user deposits and let that user generate Dai, a process that also accrues debt. The presence of the debt means that the collateral assets are locked within the CDP until the owner pays back the same quantity of Dai. At this point, they can withdraw the collateral. An active CDP always has a higher collateral value than debt value. 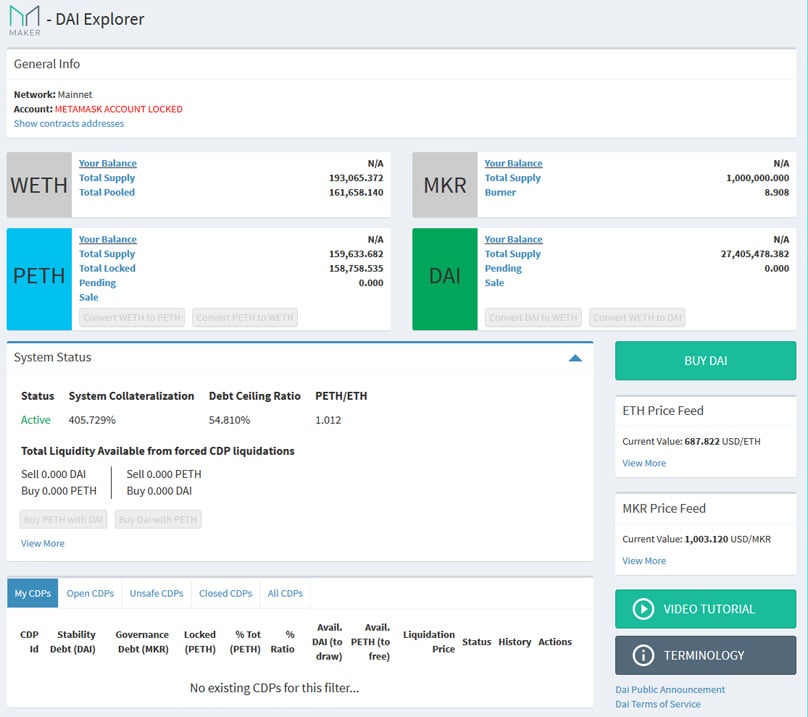 This process begins with the user sending Maker a transaction that will create the CDP followed by a transaction to fund it. Once the CDP is “collateralized,” the CDP user can send a transaction retrieving the quantity of Dai from their CDP. The CDP gets the same amount of debt in return, making it impossible to access the collateral. To retrieve the collateral, users must pay the debt, as well as a Stability Fee that is accrued over time and paid in MKR. Once the debt is free, the CDP user can withdraw as much collateral as they want.

Initially, Dai will only support Pooled Ether as collateral, but in the future, it will support a larger number of CDP types.

What Is the Target Rate Feedback Mechanism?

The Target Rate Feedback Mechanism is the autonomous feedback mechanism working toward keeping Dai stable with the USD. It will become engaged if severe market instability occurs and breaks Dai’s fixed peg. Essentially, this mechanism automatically adjusts the Dai Target Rate, so market forces keep the Dai market price closer to the Target Price. Since the Target Rate adjusts how much the Target Price will change, it can be positive and incentivize holding Dai or negative and incentivize borrowing Dai. When not engaged, Dai remains pegged and has a 0 percent Target Rate.

What Is Global Settlement?

Global Settlement is the last resort for cryptographically guaranteeing Dai keeps the Target Price. It will shut down the Maker Platform and ensure that CDP users and Dai holders get the correct amount of assets (in terms of net value). The process is decentralized and controlled by MKR voters, so it will only be used in emergencies. Examples include system upgrades, security breaches, hacking, and long-term market irrationality.

What Is Stable Fund?

Stable Fund is a combined effort of Maker DAO and L4. It is an investment fund designed to help startups that use the Dai Stablecoin System. The Stable Fund assists with strategic introductions, financing, and business development. 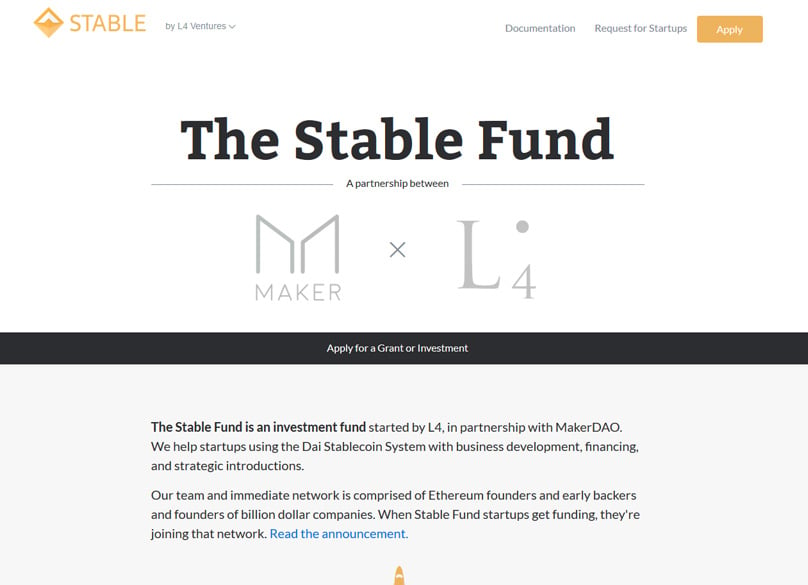 It searches for companies that have a strong technical founder and strong idea that is feasible with the current blockchain technology that also use either Maker or Dai infrastructure as one of their core components. The Stable Fund offers both equity-free grants and equity funding.

What Are Some Use Cases for Dai?

In the Dai Stablecoin System white paper, the team outlines numerous potential uses for Dai, referred to as the “addressable market.” Those in prediction markets or using gambling applications will already face a large amount of risk due to their predictions and can minimize the potential additional risk by conducting transactions with a stable token instead of a volatile cryptocurrency.

The CDPs within the system will provide the option of permissionless leveraged trading for hedging, leverage, derivatives, and financial markets. Governments and charities can see improved efficiency and less corruption with Dai due to its transparent accounting system.

Maker DAO introduced the Dai Stablecoin System, which allows for a cryptocurrency (Dai), with a stable value pegged to the United States dollar. It allows users to invest in and take full advantage of cryptocurrency without worrying about market volatility to the same extent that they would with unstable cryptocurrencies. There are numerous strategies in play to keep the value of Dai stable. The white paper displays well-thought-out reactions to potential problems the system may encounter, along with steps to mitigate the risk.