Tiberius Coin links the traditional financial markets with cryptocurrency by pioneering the sector of commodities-backed tokens. Tiberius Coin (T-Coin; TCX) can be redeemed for metal that is physically deliverable. As such, it has a price floor and intrinsic value.

Every Tiberius Coin has an underlying basket of metal, which is publicly disclosed and identical. This feature allows for fungibility of the token. Additionally, the metals that underlie the tokens give holders exposure to the three strategic commodity themes behind the project. These include stability metals (gold and platinum), technology metals (copper and tin), and metals used in electronic vehicles (aluminum, cobalt, and nickel).

Although Tiberius maintains the connection between the crypto and the metals underlying it, the connection is decentralized thanks to independent service providers. Network integrity is maintained with rational economic principals. Tiberius feels that two of the most important factors behind the coin are the facts that it will never reach zero and that it is decentralized.

As mentioned, the Tiberius Coin grants direct ownership to a basket filled with strategic metals that hold the key to future technology. Independent warehouses hold and audit the metals, and token holders can request delivery of then. You can think of each T-Coin token as a basket of metals with set quantities of each.

Tiberius carefully chose the technology metals within the basket due to their ability to benefit from the project’s strategic commodity theme. Additionally, all but gold have uses in industrial applications, ensuring they always have some sort of intrinsic value.

How Does Tiberius Invest in the Metals?

Tiberius Group AG is actually a world leader among commodities asset managers, metal merchants, and mining operators. Tiberius plans to buy the metals via the London Metals Exchange, which is among the most liquid and oldest exchanges worldwide.

Because of the use of the blockchain, Tiberius Coin is stable and secure, relying on smart contracts to reduce risk and speculation. Tiberius Coin is also liquid and flexible. Because TCX is backed by the highly liquid global metals market, there is no concern about it being nearly impossible to cash out if new regulations are introduced, which would be a concern with other digital assets. Tiberius Coin also offers an investment opportunity that can lead to high growth with no fees, as it is poised to harness the metals sector, which will soon reach $34 trillion. Additionally, Tiberius is transparent and regulated.


Because the Tiberius Coin relies on actual metals, the fundraising for T-Coin is an Initial Metals Sale (IMS) instead of an ICO. This is because it is selling metals that have a completely developed regulatory, technological, and legal framework. By contrast, an ICO would sell a product for delivery far in the future or be a method of crowdfunding for that project.

What Fees Are Associated with Minting TCX? 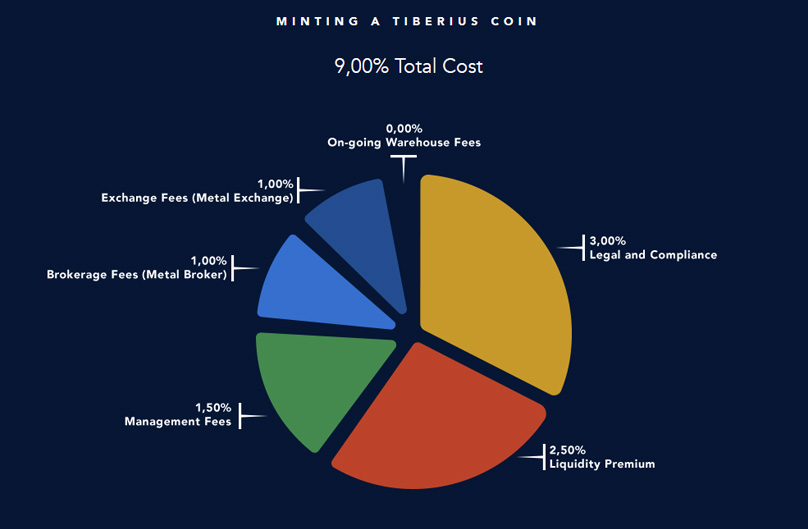 Tiberius understands that some potential investors are discouraged by the fees since these are uncommon in traditional ICOs. Tiberius has a post on its website outlining exactly why the fees are necessary, but it comes down to the fact that TCX is actually backed by an asset, unlike most ICOs, which do not have something physical backing them. The fees are necessary to protect investors and ensure they receive the intrinsic value behind the tokens.

Those who are concerned about the fees should consider participating in the initial metal sale, as this adds the perk of 50 percent off minting fees.

The blockchain takes care of all transactions regarding Tiberius Coin, taking advantage of that technology’s built-in security. Additionally, Tiberius makes compliance a priority and has PricewaterhouseCoopers audit its metals. To take it a step further, Tiberius stores the metals in an independent network made up of competing warehouse companies. Between all these factors, those who invest in T-Coin will know that the metals backing their crypto are safe, fully insured, and secure. The market prices are easy to follow, as they will track those of the London Bullion Market. Because of the blockchain technology, it is easy to trace Tiberius Coins, and you can redeem them at any time for physical metals.

The project began in 2012 with Tiberius Mining, followed by Tiberius ComTech in 2016. Tiberius planned the metal basket, assembled the core team, investigated blockchain tech, and wrote the whitepaper in 2017. Q1 of 2018 included the release of the proof of concept for the basket of metals, announcing the project, launching the website, and publishing the whitepaper. In Q2, the team updated the website, began the marketing campaign, released the process to convert Tiberius coins into metals, and designed the architecture for the coin. 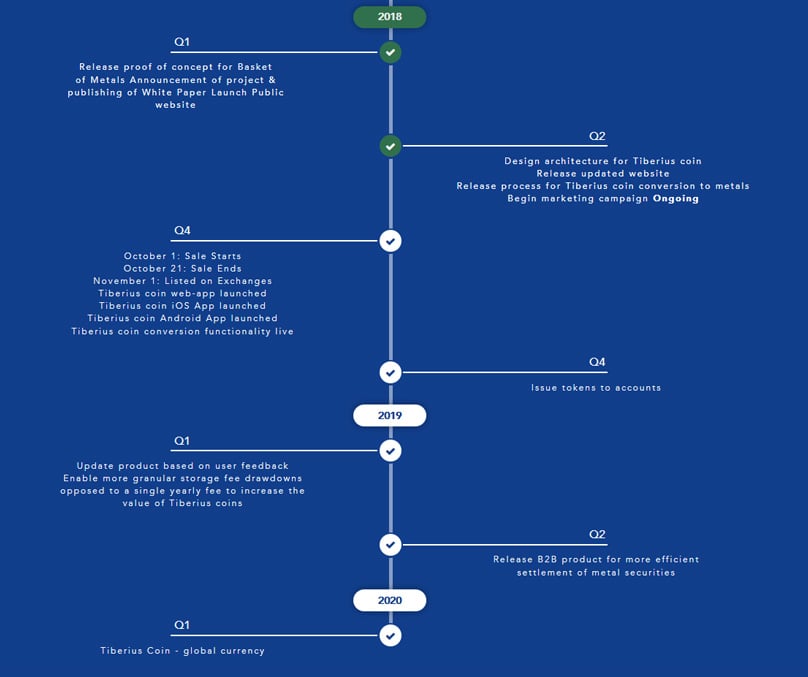 In Q4 of 2018, the initial metal sale will take place from Oct. 1 to the 21. On Nov. 1, TCX will be listed on an exchange. This is also when the web, Android, and iOS apps will launch and when the coin conversion functionality will go live. Q4 is also when accounts will receive their tokens.

Q1 of 2019 will see updates to the product to address feedback and the allowance for granular storage fee drawdowns to enhance TCX value. Q2 will include the release of a B2B product that makes it more efficient to settle metal securities. By Q1 of 2020, Tiberius Coin should be a global currency.

Tiberius Coin is an asset-backed token that is backed by a basket of physical metals. Tiberius aims to harness the future growth of the metals industry to deliver profits to investors and carefully chose the basket of metals to include those which are most likely to be used in high volumes. Since the token is backed by metals, token holders can request their metals or leave them in Tiberius’s storage. 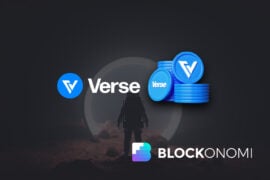 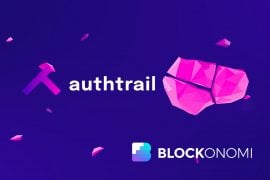