The legal cannabis industry and the cryptocurrency industry appear to have a budding relationship, if you’ll excuse the pun.

The two share a lot of common ground. Both operate in legally gray areas, particularly in the United States. They face many of the same challenges from financial, political, and regulatory standpoints. Their user bases could even be said to overlap, as both legal cannabis and cryptocurrency are most popular with younger demographics. 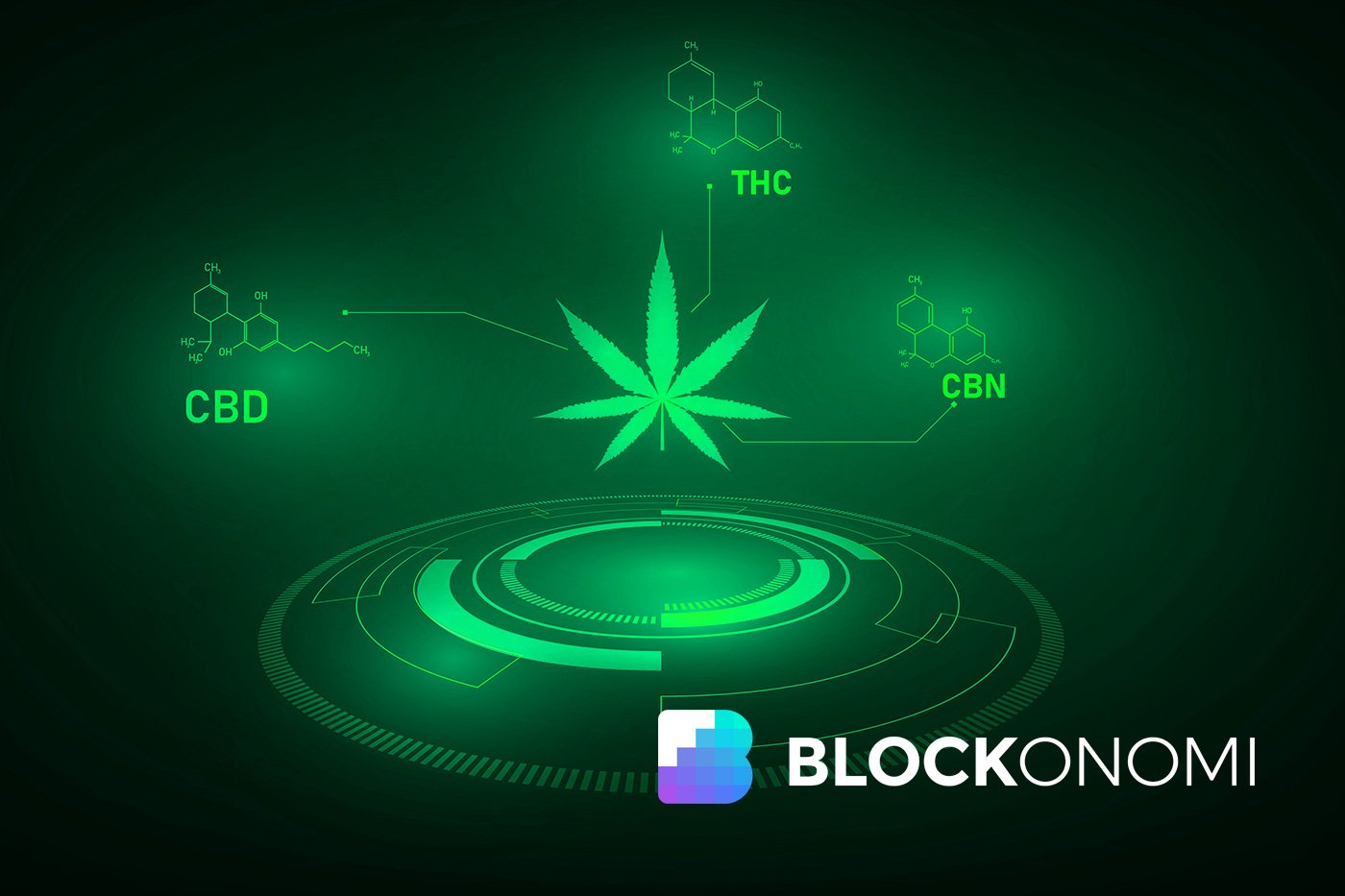 Their shared traits aside, cannabis and cryptocurrency have complementary business models that are likely to bolster one another as adoption – in both – becomes more widespread. Some companies on both sides of the aisle are already taking advantage of this natural synergy. We’re going to present a brief survey of the separate cannabis and crypto business landscapes and point out the important intersections developing between the two.

The challenges facing cryptocurrency adoption are all too familiar. Despite operating in the public sphere for the better part of a decade, cryptocurrencies are still viewed as a fringe financial tool by the mainstream media, public, and financial institutions.

Part of this is practical. Cryptocurrencies are relatively new, if viewed from the thousand-year history of currency, and they do not yet enjoy day-to-day use anywhere outside of a few tech enclaves in Malta, Puerto Rico, and some major cities in the U.S. and Asia. They are, in a word, unfamiliar.

Few government regulatory agencies know exactly how to approach them, and even fewer businesses trust them as a secure store of value. This is partly due to their current volatility and partly due to their low adoption rate. It ends up being a bit of a vicious cycle. It’s difficult to get merchants to accept crypto because few individuals or financial institutions are willing to handle them. As a result, fewer merchants are willing to accept them, and round and round the issue goes.

Then there are some very real legal issues. It’s not entirely clear whether some, all, or no cryptocurrencies qualify as securities. They are not traditional currencies, as such, and so are not treated or taxed in the same way. And they possess a technological component that sets them apart. They are stored and traded on blockchains, which offer fast, distributed, and transparent transaction chains.

These advantages are a bit of a double-edged sword when it comes to regulation, however, as blockchains can transcend financial institutions, businesses, and even national borders.

Major cities now have more Bitcoin ATMs being placed which is opening up access to more people & there are also other ways to transact bitcoin which are growing in popularity but there is still a long way to go before mainstream adoption.

Let’s just assume, for the moment, that we’re talking about portions of the world where cannabis is entirely legal. That lets us dispense, to use another pun, with all the areas where cannabis enjoys not-quite-official status – no-enforcement zones, decriminalized areas, and so on.

So, we’re really talking about states, in particular, where marijuana dispensaries are all aboveboard, legal, and recognized by the U.S. government.

Even with all that official backing, cannabis dispensaries and farms face significant challenges. Few banks want to offer loans or credit to a marijuana-based enterprise due to the newness of the market and the sticky legal issues that arise when states’ rights come into play.

Marijuana is still not legal on the federal level, and because banks are required by law to be federally insured, it’s not entirely clear whether they can play on an equal playing field in the marijuana industry. 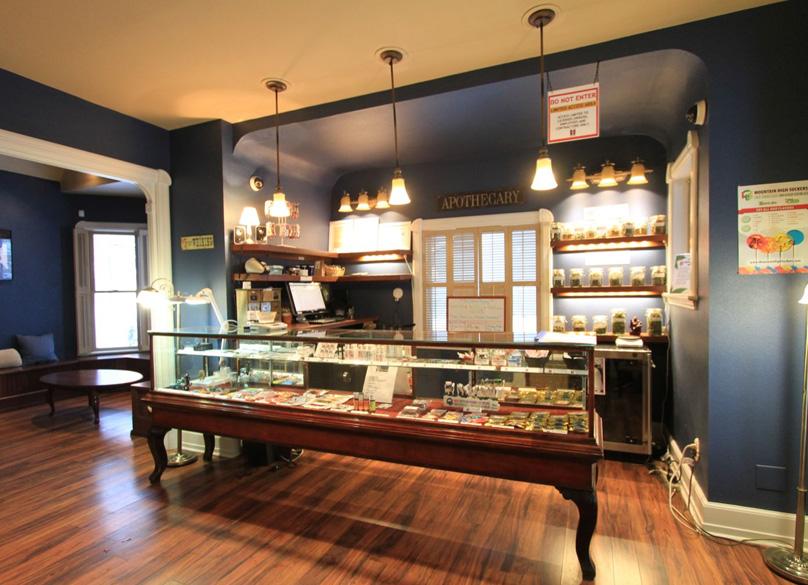 A Cannabis Dispensary, Image from Precisecannabis

This is important. It means that’s the billion-dollar, legal marijuana industry (and marijuana is now legal in two-thirds of U.S. states) must operate on a cash-only basis, much like its black-market cousin. This puts it in the same “unbanked” boat as much of the third world.

It’s this “unbanked” situation that really creates the potential for crypto and cannabis to come together. Cryptocurrencies have demonstrated, via their blockchain technology, that they present a viable alternative for folks unwilling or unable to secure traditional banking accounts. As originally spelled out by Bitcoin creator Satoshi Nakamoto in his landmark white paper, cryptocurrencies contain within their blockchains all the trust and information needed to bypass third-party intermediaries, like banks, entirely.

Value can be stored in a distributed and open way across the blockchain, and it can be transferred without the involvement of a financial or government entity.

It’s been done before, though the comparison is likely to raise eyebrows. The first widespread adoption case for Bitcoin was actually the Silk Road black market, where drugs, guns, and other unsavory items could be bought anonymously and in an (at the time) untraceable fashion with Bitcoin.

This association between cryptocurrencies and drugs might feel uncomfortable, at first, but they both lend each other an air of respectability in the long-run. Marijuana may be federally proscribed, but it is legal at the state level. Cryptocurrencies might get sideways glances from U.S. tax and regulatory officials, but there’s nothing inherently illegal about owning or using a Bitcoin.

Blockchain tech and cannabis seem to go hand in hand in this regard. Cannabis operators can rely on a blockchain tailored for their use as both a store of value and a transaction medium that’s more secure and easier to handle than cash. At the same time, the blockchain gets a ready-made group of adopters to display as a real-world test case. After all, if the blockchain works well for securely tracking and handling cannabis transactions, why wouldn’t it work just as seamlessly in auto, flight, or grocery transactions?

Both industries have a lot to prove, both to the public and to regulators. The blockchain is practically designed for transparent, easily accountable transactions. This gives cannabis operators some safety from government regulators looking to ensure that product isn’t being moved into still-black markets, and it gives would-be cryptocurrencies some credibility in terms of handling large numbers of day-to-day transactions.

There are several major projects currently working to wed the crypto and cannabis industries. Most of them popped into being during 2014. The five most prominent are PotCoin, CannabisCoin, DopeCoin, HempCoin, and CannaCoin. As of May 2018, none has yet achieved widespread adoption. However, they all share the same basic use case – giving marijuana growers, distributors, and associated industries a common medium of exchange and verifiable store of value. 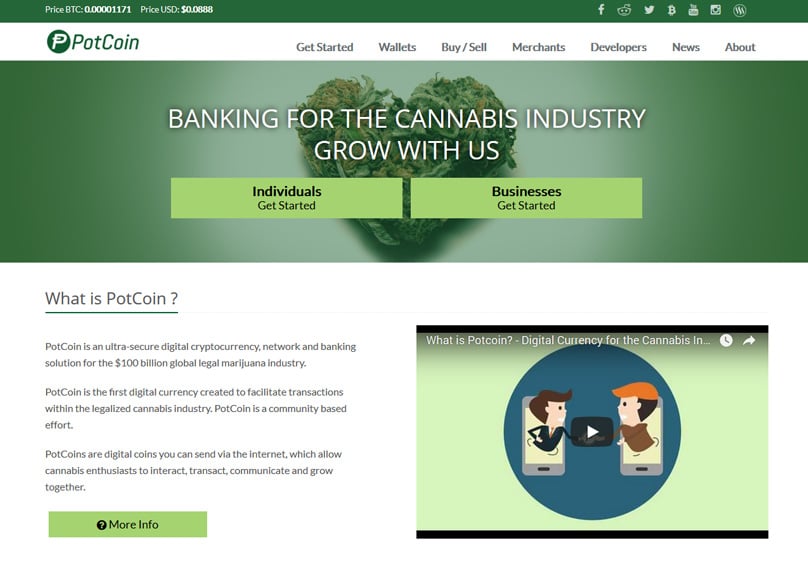 Banking for the Cannabis Industry, Image from Potcoin.com

Tellingly, all but CannaCoin boast market caps in the millions of U.S. dollars. PotCoin, the oldest of the bunch, has a market cap of $31 million.

Both crypto and cannabis are brand-new industries. The infrastructure for both is almost nonexistent from every possible angle. In fact, neither enjoy completely legal status across the entire United States. Cannabis is currently only legal on a state-by-state basis, while the U.S. Securities and Exchange Commission has a hands-off policy with regards to cryptocurrency exchanges.

The two are likely to grow up together, so to speak. Their shared challenges create opportunities for complementary growth, particularly in the legal and regulatory arenas. Cryptocurrencies give transparency and accountability to marijuana operators. Marijuana operators create a valuable and stable customer base for cryptocurrencies, in addition to injected capital. Both are poised for growth as U.S. demographics lean increasingly left in terms of regulation. Overall, cannabis and crypto present a unique view of the future financial world.