CryptoKitties is a decentralized app built atop Ethereum. It’s brand new, but it’s already been taking the Ethereum ecosystem by storm, with millions of dollars’ worth of CryptoKitties trades occurring since the project launched.

What gives? Described as digitized avatars akin to virtual Beanie Babies or Pokemon cards, each CryptoKittie represents a different non-fungible ERC-721 token on the Ethereum blockchain. 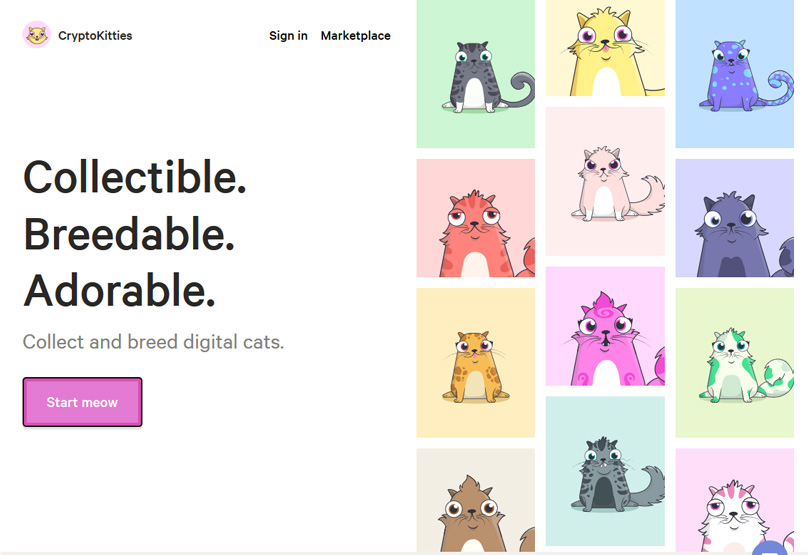 These tokens are being transacted in droves and everyone’s wanting to know more. We’ve got you covered.

Who’s Behind the Game?

Based out of both San Francisco and Vancouver, the “award-winning venture studio” Axiom Zen is the creator of CryptoKitties. The studio describes the game as follows:

“Collect and trade CryptoKitties in one of the world’s first blockchain games. Breed your rarest cats to create the purrfect furry friend. The future is meow!”

“CryptoKitties is a game centered around breedable, collectible, and oh-so-adorable creatures we call CryptoKitties! Each cat is one-of-a-kind and 100% owned by you; it cannot be replicated, taken away, or destroyed.”

So the novelty and fun of the project, then, is that users can collect, breed, and trade “pets” at will.

Why This Is Big For Ethereum

CryptoKitties are one of the first major expressions of the promising future Ethereum can bring to the world. On the surface, these “Kitties” might just seem like a digital Beanie Baby on the Ethereum blockchain. But these Kitties point toward what a tokenized future will look like.

That’s because the ERC-721 protocol that CryptoKitties are based on can be used to tokenize literally anything. For example, these CryptoKitties could just as easily signify:

To this end, the possibilities are endless.

And it’s CryptoKitties, then, that’s hailing the tokenized world that’s to come. Because make no mistake: this is only the beginning. Ethereum and ether will continue to explode in popularity and value as people realize (through the popularization of apps like CryptoKitties) that anything and everything can and will be tokenized within a few years.

Crypto-Collectibles Are The Next Big Thing

Indeed, CryptoKitties are just the first among countless digitized (or eth-ified) assets that will become collectibles facilitated and transacted through the Ethereum blockchain.

In the future, everything from mundane community-based collectibles to timeless pieces of art will be transacted as cryptocollectibles in the same way CryptoKitties are being now. 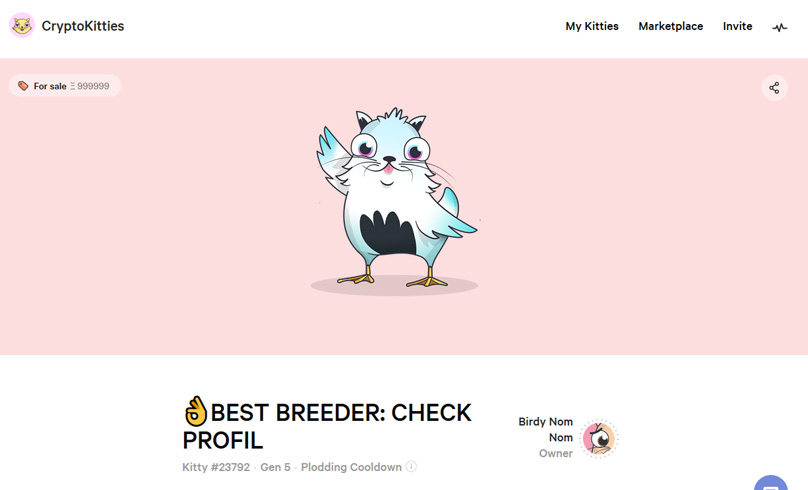 Imagine if prominent artists of the future opted to release their newest works through Ethereum and not through a traditional gallery. That’s the kind of future CryptoKitties points to.

It’s important to keep in mind that CryptoKitties have zero utility right now. They perform no function other than being an interesting and novel token that can be traded with other like-minded users.

And if people are adopting non-utility tokens now, imagine in the years ahead when even more complex developments turn the space upside down. Then adoption will truly be kicked into overdrive.

The Business is Booming Right Now, Too, Relatively Speaking

At press time, more than $2 million USD worth of CryptoKitties trades have been conducted. That’s pretty damn impressive considering how small the Ethereum ecosystem still is in the grand scheme of things.

Specifically, more than 4409 ETH have been traded in for ownership over CryptoKitties. The average sale price is going on $92.76, while the median sale price is $7.22. These figures will undoubtedly fluctuate greatly in the coming weeks.

18822 unique CryptoKitties have been sold for now, and 3838 re-trades have taken place.

Interested? You can peruse the current CryptoKitties market here. You’ll find Kitties in every price range. There are cheaper ones in the .09 ETH price range and ones that go higher than 8 ETH. Every Kittie is valued differently depending on its attributes. The cheapest Kitties are going for around .03 right now. 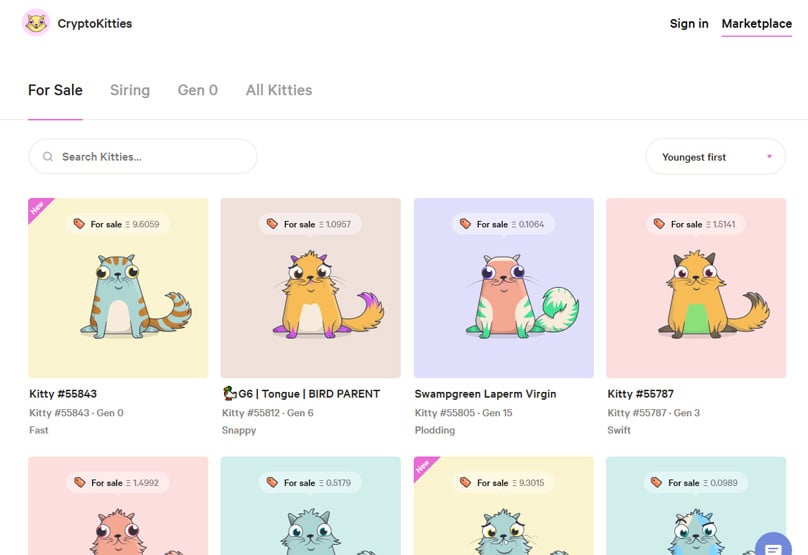 There’s enough Kitties to go around, though, and there’s definitely one (or two or three) for you if you wanted to dive in and pick your first cryptocollectible up.

Someone Bought One CryptoKittie For 246 ETH!

The very first CryptoKittie, also known as Kitty #1, goes by the name “Genesis.” On December 2nd, 2017, one user under the moniker of Stimpson J. Cat bought ownership over Genesis for a whopping trove of 246.92 ether / $115,000 Hard to believe, right?

Not really. You just have to consider the fact that Stimpson J. Cat’s betting Genesis could be worth a great deal of money one day. It’s a speculative gamble, to be sure, but not an outrageous one. If Ethereum really does skyrocket in the years ahead, people will certainly clamor to get a hold of the first major cryptocollectible. 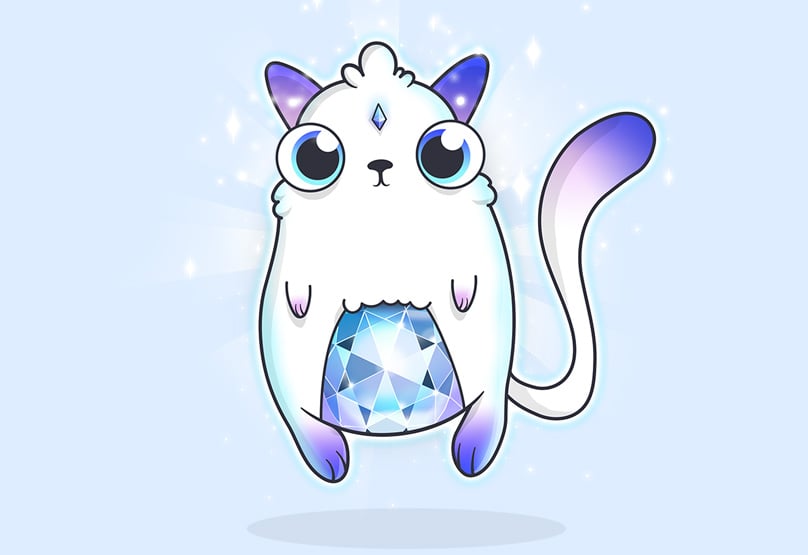 “Greetings, human. I am Genesis. The dogs know me as alpha; the cats know me as omega. To your kind, I am a riddle wrapped in an enigma, first found by a user in Mystery, Alaska. I looked into the void and the void looked back. Then I lost interest. I can’t wait to be your new owner!”

That’s a cool bio, but it’s still hard to believe someone bought Kitty #1 for 246 ETH. That’s the USD equivalent of  $115,000, a major sum for a promising but unproven new kind of collectible.
Other major sales have included:

Getting Technical: A Web Of Smart Contracts

The CryptoKitties project is interesting in that it’s facilitated through the coordinated efforts of five smart contracts. That dynamic alone highlights how society itself will undoubtedly be powered by a complex, interweaving web of smart contracts in the years ahead. 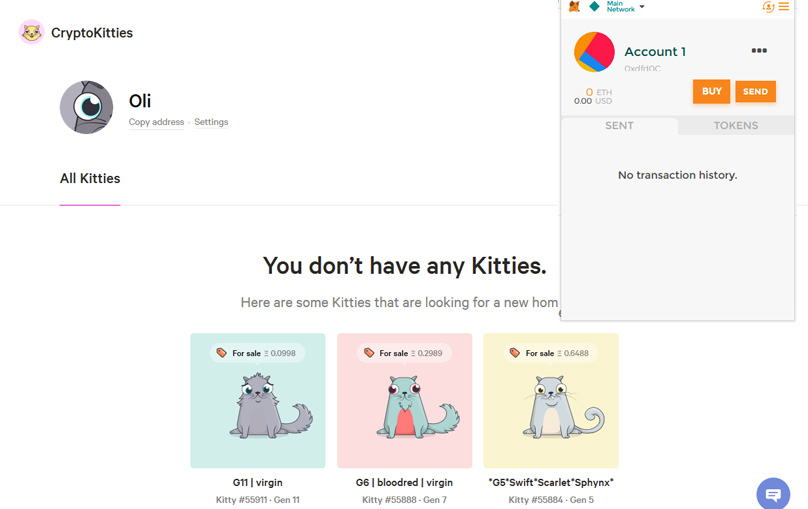 CryptoKitties Illustrates Why Scaling Will Be Needed

At press time, more than 15 percent of the entire Ethereum network is dedicated toward powering the traffic that CryptoKitties transactions are generating right now. That’s a titanic surge for an ERC-721 token that just went live days ago.

But that massive surge has also  network has had an acute increase in traffic in a very hefty way. The only project that’s evenly remotely close to generating a similar level of traffic is the exchange EtherDelta, which outputs 8 percent of the transactions on Ethereum.

The congestion that has resulted has even forced CryptoKitties to raise birthing fees in the game:

🚨🚨🚨🚨 Due to network congestion, we are increasing the birthing fee from 0.001 ETH to 0.002 ETH. This will ensure your kittens are born on time! The extra is needed to incentivize miners to add birthing txs to the chain. Long-term solution will be explored very soon! 🚨🚨🚨🚨

Alas, with a single upstart game causing so much congestion on the network, the subject of scaling has come to the forefront once more for Ethereum.

The good news is that there are projects like Raiden and Casper that are going to help Ethereum scale in the short- and mid-term.

In the early hours of December 3rd, the Ethereum network had a backlog of thousands of unconfirmed transactions. Accordingly, if CryptoKitties continues to gain in popularity, the network could be seeing congestion get worse before it gets better as improved scaling solutions are implemented.

It’s all a bit crazy for now, that much is clear. But Ethereum’s going to have to scale competently to keep up with the “crazy.” 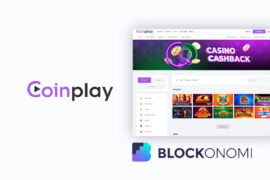 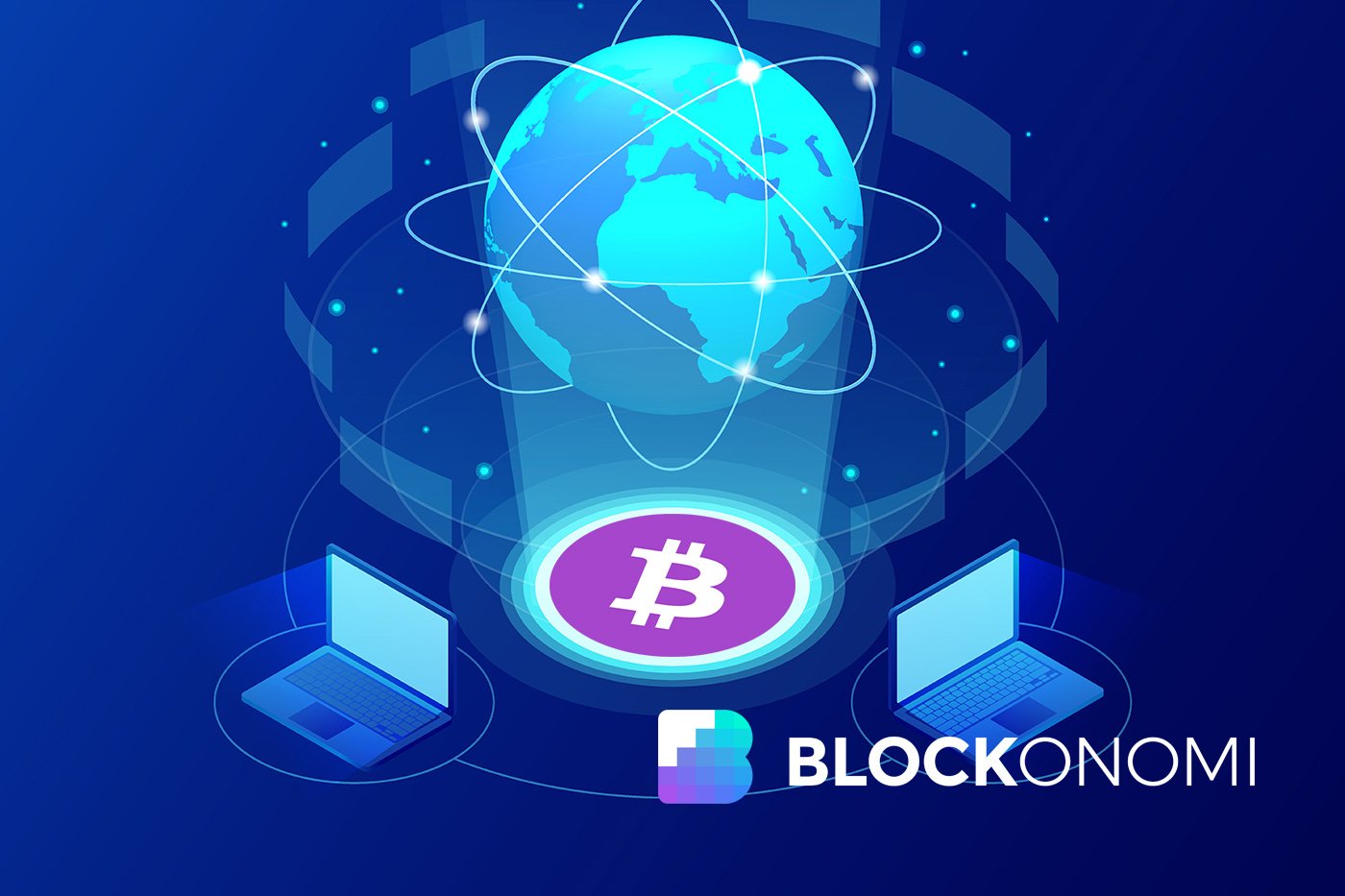