This week, the concept of the “exit scam” hit the headlines of the cryptocurrency space as escrow-related crypto startup Confido – painfully and ironically meaning “I trust” in Italian – went dark, making off with thousands of investors’ money. And among these thousands, many lost everything – literally.

With CFD all but worthless now, the community’s been left reeling as a token that was deemed a hot and trustworthy investment just days ago has now wrecked untold numbers of portfolios in truly rapid fashion. 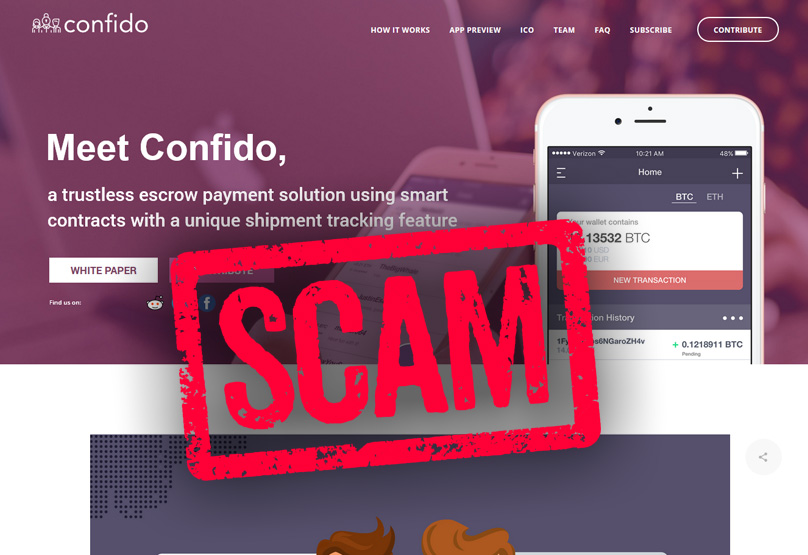 Today, in the interest of raising awareness about exit scam warning signs, we’ll be walking you through some of the red flags the community missed with the Confido project. Not to pile on, surely not. But rather so that we may all be able to better identify and respond to similar fraudsters in the future.

If you haven’t been using LinkedIn to research the teams you’re investing in, then there’s no better time to start than now.

While a few minor voices in the space raised alarms about the Confido teams’ LinkedIn pages early on, it wasn’t until the whole scam had progressed beyond the point of no return that the majority of stakeholders realized these very pages were clear fakes.

The dead giveaway was the fact that the pages of the four main scammers involved – two developers and two executives – were brand new and had barely any connections.

The Confido “team” – Image via Mashable

Naturally, people with the skills needed to develop and launch a crypto startup have much more connections and reputable, tenured work histories than these fake Linkedin “profiles” exhibited.

Going forward, if you plan on investing in any new cryptocurrency projects, be sure to find out the team leaders involved and give their LinkedIn pages a decent look-through.

You should see plenty of connections and respectable past job experiences.

Pay Close Attention to Claims That Are Being Made, Both from Devs and Users

If you were active in the various crypto forums before the CFD team made their “legal announcement,” you’ll remember that one of the most hyped aspects of the Confido project was its recent “collaboration” with ChainLink, an exciting and new ERC-20 token that facilitates a decentralized Oracle service.

Indeed, “Confido teaming up with ChainLink!” became a rallying cry for recent shillers.

The only problem is that CFD hadn’t teamed up with ChainLink at all; it wasn’t a partnership or collaboration of the sort that many were suggesting.

Instead, what really happened was the CFD team claimed they were going to be using ChainLink for oracles – a much different reality than a straight-up partnership.

But that didn’t stop many from falsely marketing a bona fide collaboration between CFD and LINK.

This is why it’s important to carefully scrutinize every major claim that’s being made about a cryptocoin you’re interested in investing in – regardless of who’s making the claims.

A bit of rhetorical scrutiny will go a long way in the early Wild-West of crypto.

What should’ve really scared off major investments in Confido is the fact that the project had no Minimum Viable Product (MVP) at the launch of the CFD ICO.

Henceforth, it’s best to avoid any ICO that doesn’t have a working product live yet.

And let’s be clear – having an ERC-20 token live isn’t the same as having a working product live.

TokenLot, the company that helped Confido run its ICO, said the Confido team had provided “proof of token creation and distribution of tokens to investors.”

But creation and distribution of an ERC-20 token, again, is not a working product.

Place your trust in projects that are proving themselves by consistently meeting transparent, community-auditable milestones.

It’s just too easy for microcap ICOs – ICOs that have super small fundraising caps – to be manipulated in the way that the CFD team’s guilty of doing.

But you should scrutinize microcap projects with extra meticulousness from now on just to ensure that you’re not going into a microcap project blindly because of its huge price potential.

It’s exactly this sentiment that the Confido team disturbingly preyed upon, noting in one of the project’s announcements that they wanted to be “humble” for the community:

“We think the current ICO space is messed up; companies are raising millions without a fully working product or existing customers. We have talked with financial analysts and we simply don’t need more than $400,000 to develop and market our project. ICO’s are a great opportunity to get funding for a project, but we don’t want to abuse this opportunity.”

Well, in the end, the Confido team absolutely abused the community’s excitement – and the way they knowingly did it is sickening.

Don’t let the next fraudsters that come along do the same.

If a super attractive crypto investment opportunity seemingly falls out of the sky with a ton of interest out of nowhere, chances are it’s too good to be true.

The Confido hype campaign was industrious over the past few weeks, to say the least. And this hype was enough to overpower the numerous red flags that should’ve been obvious to the community. There’s no doubt the Confido team paid some portion of online forum users to “spread the word,” as it were.

And scammers were cynical enough to know investors’ excitement would take things from there.

Now it’s time for all of us to be more cynical. We need to scrutinize the marketing efforts of new crypto projects to steer clear of tokens with lots of hype and no substance.

Investment Safety 101: Do Your Own Research

Many got burned on Confido because they took the advice of others without doing their own due diligence. But it’s as the old saying goes: if you need something done in this world, you’ve got to do it yourself.

This maxim is particularly apt in the crypto space – you need to be doubting Thomas and put your own eyes on the data that you need to see to be comfortable with making an investment. Pour through LinkedIn. Pour through Twitter. Check Piccolo Research. Be hungry in your pursuit of reputable sources that you can trust to lead you in the right direction.

Sketchy projects won’t be able to hold up under moderate scrutiny. Make sure you do your homework, and you never know – you might just save yourself and the entire crypto community a lot of heartache if you find red flags and are able to get the word out.

The Confido debacle is a true tragedy for the space.

But we must let it be a lesson for us all: it’s time to be more rigid when it comes to the standards we bring to crypto investing.