How Community Is Driving the Cryptocurrency Industry

The global cryptocurrency market doesn’t seem to be slowing down any time soon, predicted to reach a CAGR (Continual Annual Growth Rate) of 30.32% in 2030. This eclipses the CAGR rate of many other huge industries, demonstrating the economic power that’s moving behind this form of digital asset.

Yet, while many people look at the technology behind the blockchain as the driving force for cryptocurrency’s success, it could be argued that it lies elsewhere. While technology can change, expand, and develop, one thing has remained stable the entire time cryptocurrency has been gaining popularity – community

In this article, we’ll be taking a look at three distinct formats that have allowed the community to flourish as a core pillar of cryptocurrency, delving into the impact that community has on this industry.

What Forms of Community Are Commonly Seen Within Cryptocurrency?

The social aspect of cryptocurrency is rarely discussed when examining the success of these coins. Yet, once you dig into major cryptocurrencies, especially those that are on the rise, their success is closely tied to the community that invests and believes in the utilities proposed by the coin.

Of course, to drive up any price, people need to buy en masse. In a way, buying a cryptocurrency symbolizes a vote of confidence in a project, with buyers believing that the project will continue its success and rise in price.

Once a coin starts to skyrocket – to the moon, as the crypto community often says – users will often be able to track its success back to a social discussion about the currency and its various benefits. Taking a look at the communities that lie behind cryptocurrency, we can trace them back to three distinct locations or concepts:

Let’s break these down further.

Part of what draws people to Reddit is the fact that it is completely anonymous by nature, driven by online profiles where a user can sign up, make a profile, and instantly connect into conversations.

In 2021, there was a 19% increase in total Reddit posts, reaching a high of 366 million unique posts. Even with this huge number of posts across a wide range of communities, 6.6 million of these posts mentioned crypto in some regard.

Within Reddit, the crypto community is incredibly active, with popular subreddits being a hub of discussion for new and established cryptocurrencies. Some of the most popular crypto subreddits include r/CryptoCurrency, r/CryptoMoonShots, and r/CryptoMarkets, each boasting between 700,000 and 4.5 million active users.

These communities are a popular spot for people to gather, discuss cryptocurrency, and back certain projects. Reddit actually became the hub for crypto a few years ago, after larger sites like Facebook banned the advertising of anything related to crypto. While this ban has now been overturned, Reddit has still forged ahead as a dominant player in the cryptocurrency discussion space. 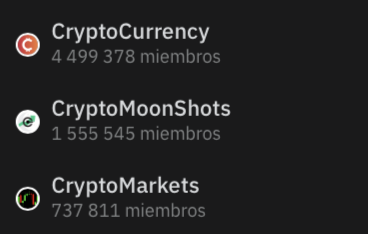 Twitter, a more public platform where many users will sign up with their own identities, has also been a space that has encouraged large communities to talk about different crypto projects. As many projects will have a social voice on this platform, they can earn an aspect of social capital by accumulating followers.

Additionally, large names that actively speak in support of cryptocurrency like Elon Musk have routinely caused cryptocurrency prices to skyrocket. As this is a platform where anyone can see other people’s tweets, when someone famous or notorious tweets their support of a cryptocurrency, its prices often skyrocket as the crypto community flock to buy that particular coin.

Famously, this was the case with DogeCoin, with Elon Musk tweeting about it and the coin’s price instantly rising more than 20%. Some of these tweets were related to being able to buy Tesla merch with Doge, while others were more lighthearted comments about how DogeCoin was ‘the people’s cryptocurrency’.

While DogeCoin ultimately crashed heavily, these huge price swings show the power of a community that actively discussed a coin. The reaction to social media and the mass flood to specific currencies closely ties to the power of community in this field.

Perhaps the most innovative form of community engagement on this list is the movement of large-scale crypto platforms to include social trading features. The most comprehensive example of this is NAGAX, which is the world’s first Web 3.0 cryptocurrency social trading platform.

Copy-trading – the art of following the trades of a professional trader – has grown steadily over the past few years. Reacting to this trend, NAGAX has developed its platform to further push the bounds of what was thought possible within this medium. While social spaces like Reddit and Twitter are fragmented, NAGAX boasts one central framework where users can actively flock to discuss their favorite cryptocurrencies.

Beginner traders will be able to copy the trades of more experienced traders, with those that are copied gaining commission on this act of following. Additionally, the platform acts as a social media for cryptocurrency, with traders given the ability to create an investing feed. These feeds will reflect what they’re currently investing in, demonstrating what they’re currently trading to the community. 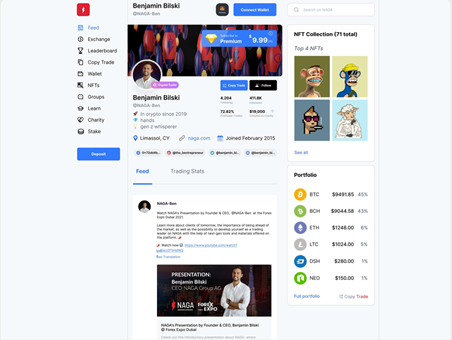 Smart traders can post their technical analysis to the social feed, which is then minted and converted to an NFT. Other users who have their Ethereum wallet connected can access these posts, making the most of the knowledge while also benefiting the copied trader with a financial compensation.

This mutually beneficial platform of information sharing demonstrates the power of social trading, with NAGAX creating a comprehensive space where everyone interested in crypto can go to learn more and earn while doing it.

When investing in cryptocurrency, users and moving to a digital medium that has genuine hype and excitement around it. Community has always been a powerful medium. Its presence around cryptocurrency is a very positive aspect that demonstrates future intrigue for this digital commodity.

The crypto community is one of the most active places that one can go when looking to get the latest information, understand trends, and hop on board with exciting new projects. From anonymous spaces like Reddit to public discussions on Twitter to social trading on NAGAX, the crypto community is a vast space that covers multiple platforms.

These communities have the power to come together, boosting the price of certain assets, openly discussing the pros and cons of certain currencies, and sharing knowledge to make the crypto space more accessible than ever.