Despite this already jaw-dropping bout of price action, many commentators argued that the move to $20,000 from $1,000 in a year’s time was just the start of Bitcoin’s adventure. 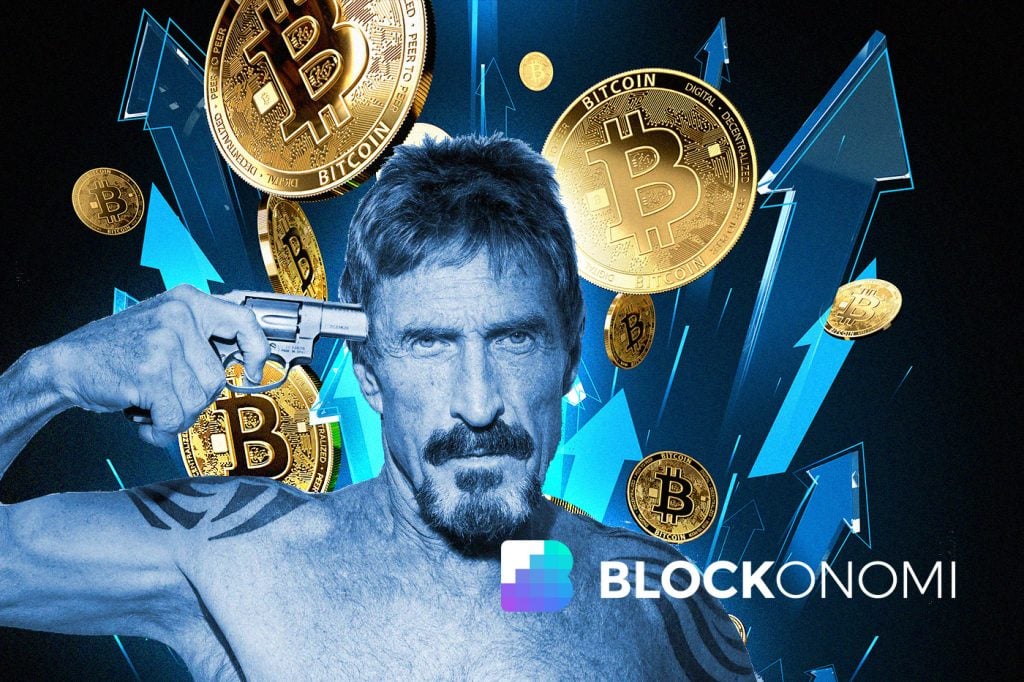 In fact, John McAfee, the libertarian cybersecurity guru-turned-cryptocurrency proponent, argued that by the end of 2020, Bitcoin will have reached $1 million a coin.

While a genius, McAfee was laughed off by many in the media and investment community who claimed that the leading cryptocurrency reaching a seven-figure price point is nigh impossible.

But, McAfee has stuck to his guns, doubling down on the target on multiple occasions. He continued this trend last week, when he explained to Forbes why he still expects for Bitcoin to top $1 million in less than 16 months’ time.

In an extensive interview with Forbes, McAfee laid out his rather simple reasoning behind his $1 million by 2020 price prediction. To boil it down to one idea, it’s scarcity. The long-time libertarian quipped that the primary catalyst that will bring Bitcoin to unfound heights is its hardcapped supply that is believed to be deflating with time:

“Let’s get real, there are only 21 million bitcoins. Seven million of which have been lost forever, and then, if Satoshi [bitcoin’s anonymous creator] is dead, add a few more million.”

What he’s arguing is that with increased demand for Bitcoin, the ultra scarce nature of the cryptocurrency will lead to a surge in price as there won’t be enough coins being fed into the market at low price points to satisfy demand.

My Forbes interview. Why I will always be bullish on Bitcoin:https://t.co/jXppNzz3Jr

Indeed, he went on to make an argument that even if Bitcoin is only adopted by a small percentage of the world, it’s price can shoot to the moon, so to speak:

“If bitcoin gets to be 5% of world financial transactions, which, you all know it will maybe 10% or 20%, [then bitcoin would be worth] $10 million per coin, based on those numbers.”

Although it isn’t exactly clear if the math checks out, McAfee went on to tells Forbes that $1 million is thus a conservative estimate.

A Bit Too Optimistic

Although McAfee has remained committed to his lofty Bitcoin price prediction through the thick and thin, not budging one bit, models and even generous estimates have proved that Bitcoin hitting $1 million by 2020 is highly unlikely, barring a collapse of the fiat financial system and a subsequent rapid global adoption of cryptocurrency.

A model that aims to derive a fair Bitcoin price prediction from its scarcity, in fact, recently found that Bitcoin is likely incapable of hitting $1 million until at least 2024.

As reported by Blockonomi, an analyst at Munich-based financial institution Bayerische Landesbank wrote that Bitcoin’s next block reward reduction will give each BTC a fair valuation of $90,000, correlating the cryptocurrency’s inflation rate to its market capitalization.

The same model says that a $1 million price point will only become feasible starting from the block reward reduction after that, expected to take place in 2024 at the earliest.

In an article titled “Bitcoin’s natural long-term power-law corridor of growth”, Burger remarked that Bitcoin fits into a natural “power law” price corridor, which has been tightening over time from a logarithmic perspective.

It predicts that the Bitcoin price will not reach $1 million until 2028 at the earliest, if at all.