If you have been paying any attention to the world of cryptocurrency, odds are that you have heard about UST losing its peg and the Luna token crashing to less than $0.001.

The effects of this event will undoubtedly ripple throughout the crypto ecosystem for some time. Not only have many investors lost money, but the entire world has witnessed a supposed “stable” coin, with a market cap of $18 Billion, fall from its intended value of $1 to $0.17 at the time of writing.

This is an enormous blow to the confidence of average investors and an obvious point of contention for government regulators. As the crypto world moves forward, it is more important than ever for people to understand what an algorithmic stablecoin is, how UST was designed to hold its value at $1 USD, what went wrong, and, most importantly, how we could ever trust another stable coin again.

So, what is UST? UST is a stable coin that is bridged onto the Ethereum blockchain and is intended to be worth exactly $1. The Terra ecosystem, however, exists on its own proof-of-stake blockchain for the purpose of maintaining UST’s value. This is accomplished through seigniorage and arbitrage. You are likely familiar with the term arbitrage, which means to buy and sell a currency in different markets to take advantage of price differences.

Seigniorage is much less common; it has historically been defined as the profit that governments can make by printing money. More simply, seigniorage is the value that can be captured when the cost for printing new money is less than the accepted value of that note. For example, the US government will pay far less than $100 to mint a $100 bill, and so creates value for itself in the process.

“Once the system has detected that the price of a Terra currency has deviated from its peg, it must apply pressures to normalize the price. Like any other market, the Terra money market follows the simple rules of supply and demand for a pegged currency. That is:

At first glance, this might appear to follow the most basic rules of your high school economics class. Supply and demand… right? However, a little imagination and critical thinking can bring you to understand the true systemic risk of UST and the Terra ecosystem.

Let’s start with the good times: when the price of Luna goes up, traders are incentivised to burn Luna to create more UST. This action reduces the supply of Luna, increasing its value further. A positive feedback loop into infinity; what could go wrong? When times are bad, things start spiraling in the other direction. A decrease in the price of Luna means that more tokens have to be created to match the value of UST, which causes the price of Luna to fall even further. This really starts to look like a problem when you recognize that the market cap is simply the total supply multiplied by the last sale price. The market cap of Luna could never really be captured by selling all the Luna tokens because the price would fall with each sale, and the value backing UST was truly only theoretical.

In reality, the UST protocol was designed to withstand a decrease in price so long as arbitrage between UST and Luna could keep pace with the bear market. When it became clear that this was not the case, Terra’s CEO began buying Bitcoin to prop up the value of UST, and the world of crypto began re-learning the first two lessons of Satoshi. That is, decentralization and a conservative monetary policy really matter. All it took from there was a large sell order and UST began to lose its peg. Consumer confidence waned, nobody wanted to get caught holding the bag, and the world began to sell. Luna’s price tanked from $85 to less than $0.01 in a week, and UST remains at a very unstable $0.08.

Given the recent disaster, it is understandable how the average crypto user might mistrust all stablecoins right now. It even gives credence to all who suggest that crypto is a scam. A crash of this scale should strike at least a little fear in everyone with a pulse! However, as it always is, the antidote to this fear is education. If you want to trust a stablecoin protocol, you need to understand how it works and, most importantly, how it is fundamentally different from UST.

There are generally thought to be three types of stablecoin.

So, what is the SigmaUSD protocol? SigUSD is a decentralized, crypto-backed, algorithmic stablecoin. Let’s break that down piece by piece:

Means the SigmaUSD protocol is entirely on-chain and non-custodial. That means there is no person or team of people responsible for managing the stable coin reserve; everything is managed automatically by a smart contract and recorded on the blockchain. There is nobody you have to trust and no chance of shady, backdoor manipulation.

Means that there is a reserve being held to give SigUSD its value. This exists as a pool of ERG placed in a smart contract. This pool has two funding sources, people trading ERG for SigUSD and people trading ERG for the reserve token, SigRSV. This pool of ERG functions to over-collateralize the stable asset, SigUSD, and absorb ERG’s volatility. This means that the majority of the risk falls on SigRSV holders, who are essentially betting that the value of the reserve pool is going to increase relative to the value of the stablecoins in circulation.

Means that there are a set of rules being enforced by the smart contract that dictate how the protocol can be used. The algorithm aims to keep the stable coin over-collateralized by between 400% and 800%. It accomplishes this by allowing users to mint SigUSD any time the reserve ratio is above 400% and allowing them to mint SigRSV any time the reserve ratio is below. It also calculates the value of SigRSV by accounting for the total number of ERG in the reserve, the number of SigRSV in circulation, and the price of ERG. The risk is shifted to the reserve holders because they are only able to redeem their SigRSV for ERG while the reserve ratio is above 400%, while SigUSD holders are able to redeem their tokens at any time. 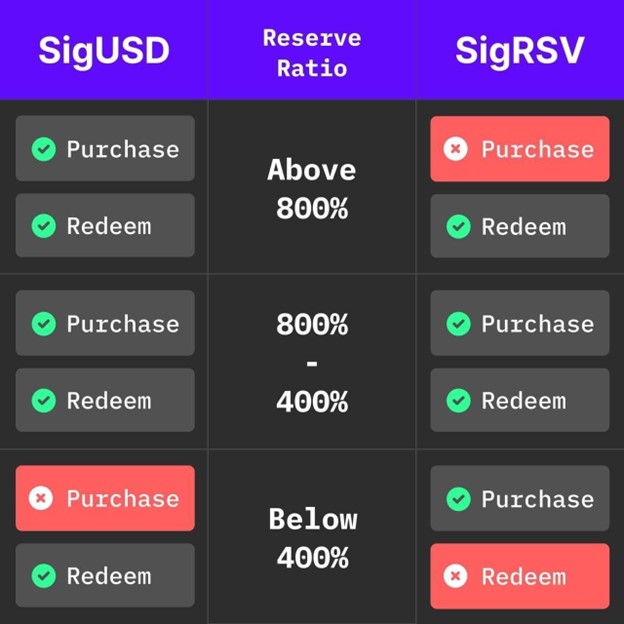 Now for the big questions: Why is this better than UST, USDC, or USDT? And how has the SigmaUSD protocol performed throughout the past year’s market volatility?

The SigmaUSD protocol is fundamentally more sound than these former options due to the very principles that define it: decentralization, a sound and conservative monetary policy, and immutable rules that govern its use. UST only ever had value because the supply and value of the Luna token were successfully manipulated. SigUSD is much safer in that it is over collateralized by several hundred percent and the holders of the token can clearly see the reserve ratio to understand the risk of holding it. USDC and USDT might have more reasonable monetary policies, but the health of the protocol is at the mercy of centralized entities. Given that we have to trust Circle and Tether, there are no guarantees that their tokens actually have the value that they claim. Besides, this is crypto! We are supposed to be getting rid of banks, not creating new ones.

Finally, on to the performance of the protocol over the past year. Since the launch of the SigmaUSD protocol, ERG has rallied from $2 to $18, back to $4, up to $19, and back down to $2 again. To say that ERG has been volatile is an understatement. However, SigUSD did NOT deviate from its $1 valuation for a single moment in time. As the crypto industry recovers and searches for solid footing after the fall of Terra and Luna, it is clear that the sector needs a thoroughly researched, open source stablecoin protocol that is trustless, decentralized and transparent. Ergo has been quietly building robust, secure and open source tools that this industry desperately needs. When it comes to stablecoins, SigmaUSD is the clear winner, patiently awaiting the adoption it deserves.