What are Masternodes? Complete Beginner’s Guide

As mega investor Warren Buffet once said, “If you don’t find a way to make money while you sleep, you will work until you die.” And whether you love that quote or hate it, when it comes to the cryptocurrency space, one way you can readily make passive income “while you sleep” is through hosting a masternode.

But let’s say you’re new to the space, and you’ve only just begun to wrap your head around regular nodes. No worries, we’ll bring you up to speed by giving you a 101 primer on masternodes: what they are and how you can use them to make passive income. 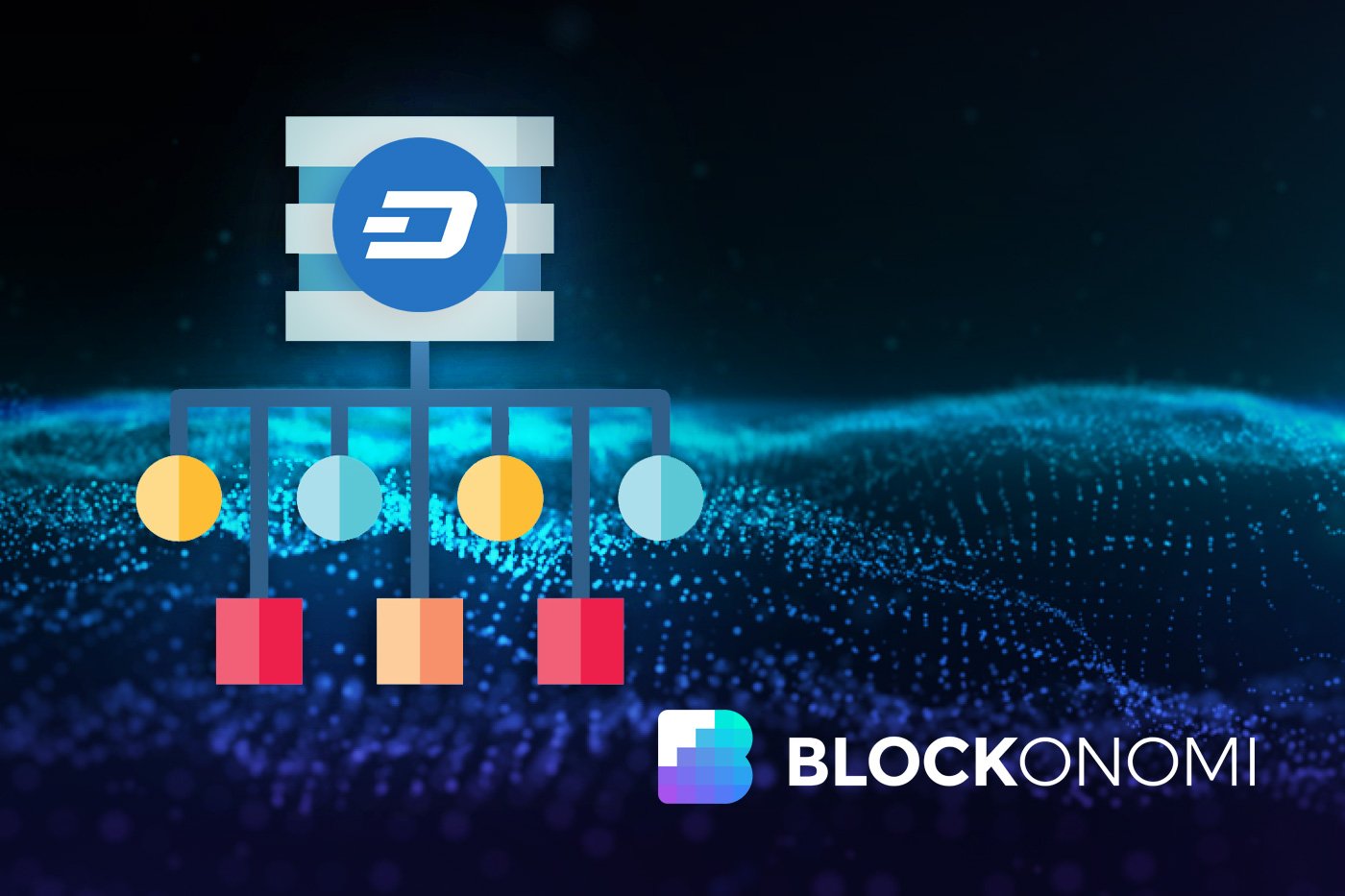 Right to it, shall we?

What Is A Masternode

Simply put, a masternode is a server on a decentralized network. It is utilized to complete unique functions in ways ordinary nodes can’t. It can be used for features like direct send / instant transactions or private transactions.

Because of their increased capabilities, masternodes typically require a sizable investment in order to run. But this is where incentivization comes into play, as masternode operators are rewarded by earning portions of block rewards in whatever given cryptocurrency they’re facilitating.

No masternode is quite alike as each network has its own pros and cons, but with that said, every system approaches payouts in a different way. Some cryptocurrencies pay out rewards to masternode operators multiple times in a day, whereas other projects payout operators once daily. The benefit of this dynamic is that operators can still earn money and provide a service to the network without having to invest in expensive cryptocurrency mining gear.

If interested in becoming an operator yourself, you’ll need to “lock away” what’s usually a large number of coins and set up a server through which these holdings can do their magic, as it were.

Many cryptocurrency users who don’t know better assume that masternodes are an extension of Proof-of-Stake (PoS) coins (i.e. cryptos that aren’t mined, but are staked), but that’s not true. There are Proof-of-Work (PoW) projects that make use of masternodes, so these kinds of nodes aren’t exclusive to PoS or PoW.

With that being said, running a masternode is PoS-like, in the sense that you generate passive income through a masternode just by holding your coins, similar to how stakers earn in PoS systems.

So it’s something to consider: you can make passive income with a masternode just like you could through a PoS cryptocurrency, but you don’t need PoS cryptos specifically to run masternodes.

How Much Money Can Masternodes Earn?

Well, that depends on a few factors:

So there’s no one-size-fits-all answer, as every project will work differently. Some will be more profitable than others, some less so. But regarding the third point above, everyone running masternodes will be sitting pretty if the entire cryptocurrency market continues to surge up in unison.

If all coins are worth significantly more in ten years than they are now, then running masternodes will end up being very profitable for everyone who took the leap with one pretty much regardless of which crypto you chose. Though, as always, nothing is guaranteed in life, no matter how obvious it seems that the crypto economy has heaps and bounds to grow from here. 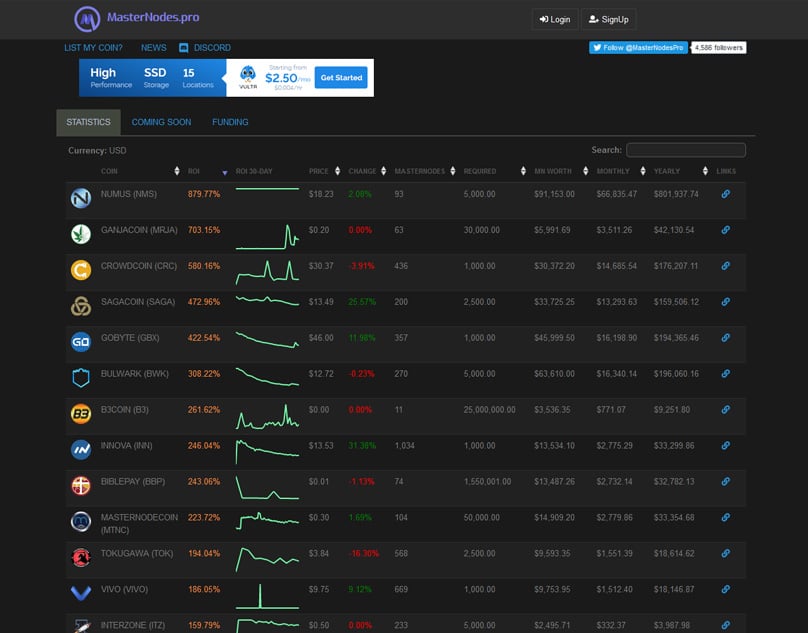 But, in getting into the nitty gritty, masternode operators typically win anywhere between five percent and 20 percent of a given block reward, depending on which cryptocurrency is being supported. These rewards help offset the costs of running masternodes in the first place, while also inspiring the creation of further masternodes.

The bottom line? A masternode is sort of like next-level holding. You have to “hodl” a large amount, but in doing so according to the specialized process, you’ll earn constant block reward payouts. And these payouts could be a trove in a decade if prices continue trending upward in the long-term.

How To Host A Masternode

If you want to run your own masternode, you’ll need to start getting some familiarity with Linux command line. Alternatively, if you’re happy to pay for the services of experts, you can always find a reliable third-party server provider and hire their services.

Depending on which company you go to and what package you choose, your server hosting costs should be somewhere into the dozens of dollars. When choosing a hosting company for Masternodes, avoid regular hosting companies which are aimed at regular websites, you will need a VPS server which gives you full control over it and allows you to install any software you like. Vultr is a popular option for Masternode hosting, which will set you back around $10 per month, per VPS. 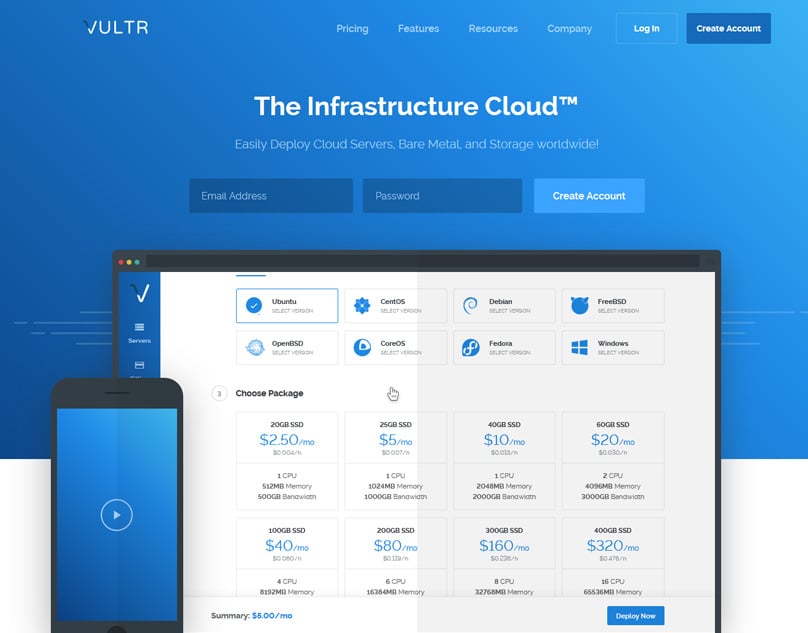 Vultr are a company which provides cloud hosting for Masternode operation.

You’ll need to do some research and see what route or what package is right for you, but rest assured you have multiple options. Whittle down your choices to the providers that seem most reputable and worthy of their price.

We will be going into more detail about suitable hosts in a future article.

Cryptocurrencies That Rely On Masternodes

There are numerous projects that make use of masternodes in their networks, but many of these projects are smaller and not widely known in the ecosystem.

Some notable masternode coins include:

In being a top 10 cryptocurrency, Dash is clearly the largest and most popular cryptocurrency to rely on masternodes within its decentralized network.

A DASH masternode performs specialized tasks, like “PrivateSend” and “InstantSend.” But what makes masternodes on the DASH network so interesting is that their operators are the ones who vote on treasury and governance decisions. That’s a major perk that miners similarly don’t have. 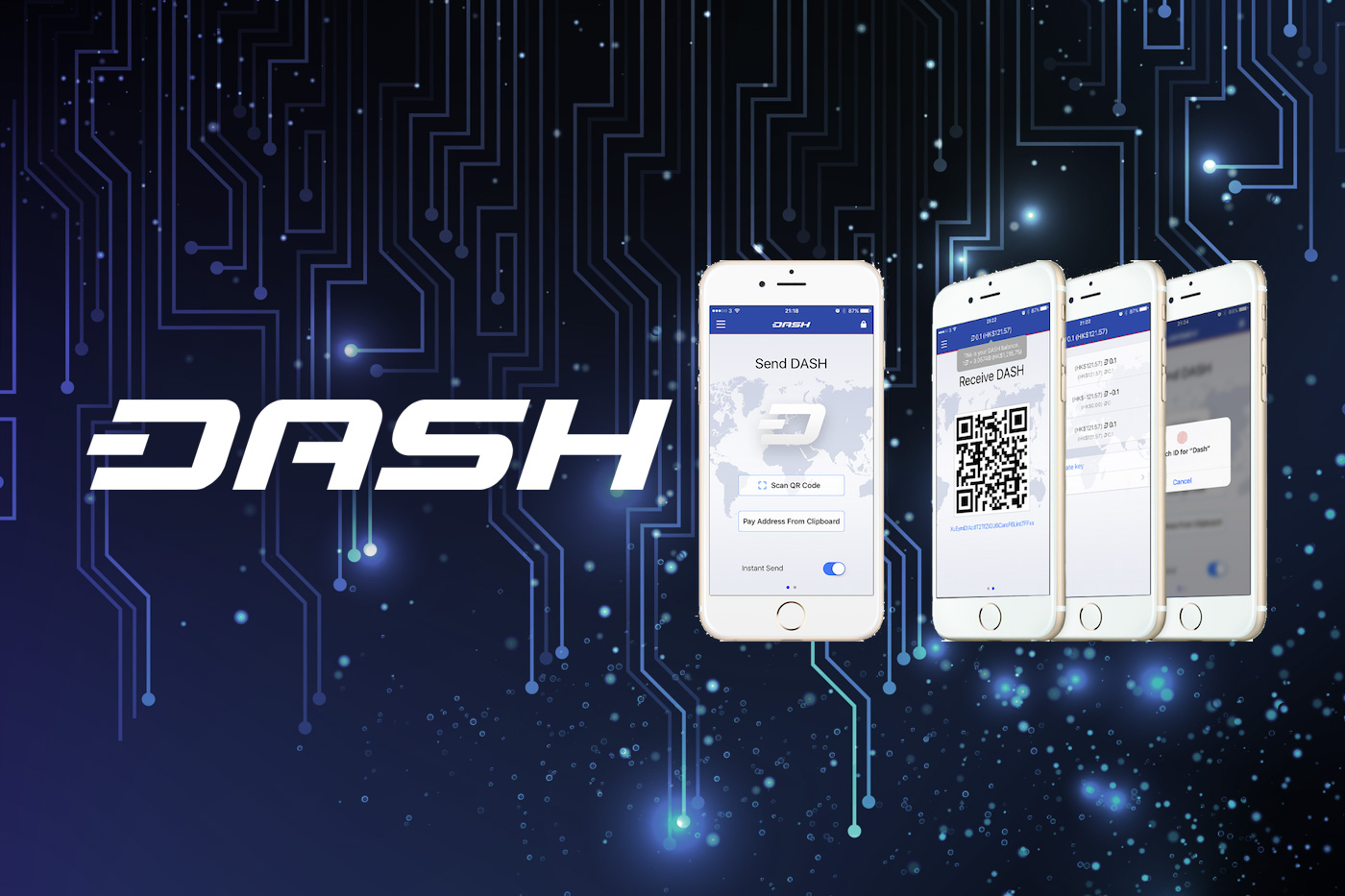 But it’ll cost you: running a DASH masternode means you need to lock up 1,000 DASH for the duration of your operations. And with one DASH worth approximately $1,180 USD at press time, that’d be quite the sum as you can see. If you have that much DASH laying around and want to get started, find out more here.

Stratis (STRAT) is a cryptocurrency project that works as a “sandbox” where developers and companies can learn the ropes of blockchain technology. As part of this set-up, Stratis recently launched a masternode product on the major Microsoft Azure marketplace. 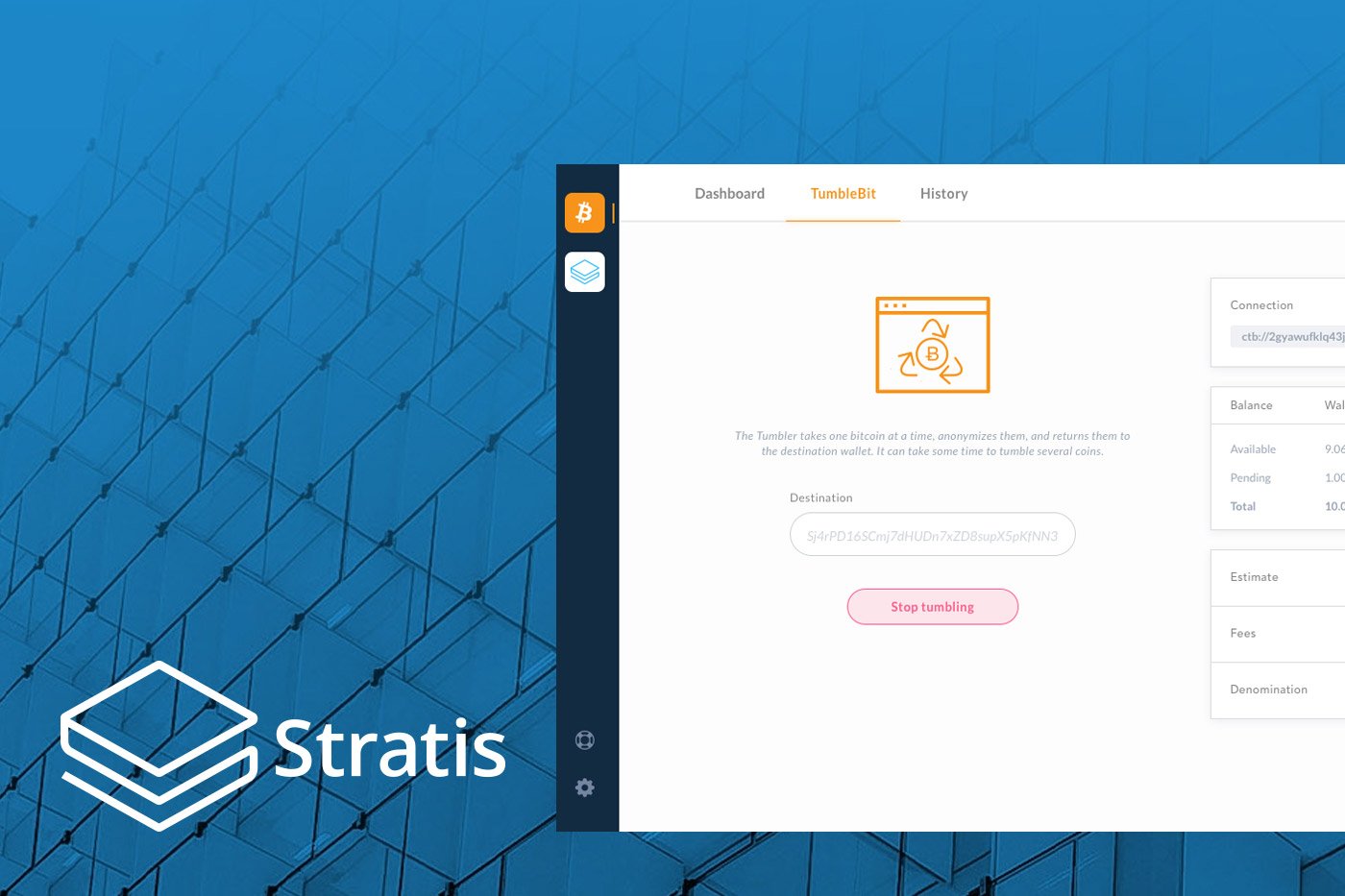 In purchasing this module, developers at companies large and small can learn how to start and run masternodes. And this could be huge in making masternodes ubiquitous in the coming years.

Per the Stratis teams’ announcement:

“The Masternode technology implements a collateral verification feature that requires the node operator provide 250,000 Strat to be held in a watched address on the blockchain. This requirement helps to incentivize the supply of appropriate resources required to operate the network.”

PIVX is another upstart cryptocurrency project that makes central use of masternodes technology. For users of this network, 10,000 PIVX must be deposited to the relevant address in order to be rewarded with a masternode.

And, just like with the Dash project, PIVX masternode operators have the privilege of having voting rights when it comes to the governance of the PIVX platform as a whole. 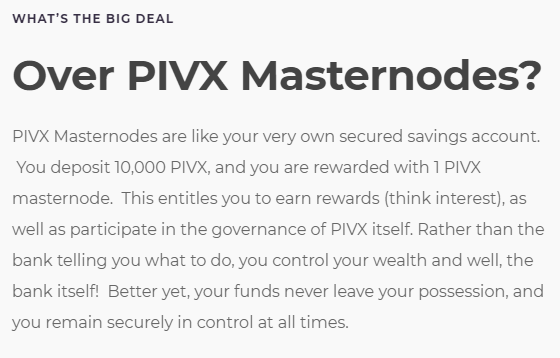 Their are some technical burdens, however. For instance, with a PIVX masternode, having 24-hour uptime for your server is recommended, and you’ll need a dedicated IP address, neither of which will be ideal for everyone.

Interestingly, though? The PIVX team itself is billing masternodes on the network as “commodity options” that could be sold as valuable commodities in the future.